1/6
Hyundai has launched its first much-awaited electric sedan, Ioniq 6 in South Korea. The Hyundai Ioniq 6 will compete with the likes Tesla Model 3 electric sedan. Hyundai Motor Group has planned to launch as many as 31 all-electric models till 2030.

3/6
The design of the new Hyundai Ioniq 6 EV is clean with a slanting roofline and coupe-ish profile. The rear of electric sedan looks like a Porsche spoiler.

4/6
The interior of the Hyundai Ioniq 6 comes with a 12-inch infotainment system, multiple USB Type-C and Type A ports. It will also support for Android Auto and Apple Carplay along with 64-colour ambient lighting.

5/6
The Hyundai Ioniq 6’s infotainment system will provide real-time travel radius mapping based on the current state of charge. The system’s connected car services also help search and plan the best route to include a charging station along the way. The EV also offers Hyundai SmartSense, Advanced Driver Assistance Systems, ensuring safety and convenience for the passengers.

6/6
The Hyundai Ioniq 6 comes with long-range 77.4 kWh battery pack and it has been paired with two electric motors for 320 hp and 605 Nm of torque. The EV can also be paired to a single motor for maximum range. There is also a 53 kWh battery pack paired with a single motor, however, the official numbers of this trim has not been revealed. Hyundai claims that the Ioniq 6 electric sedan can touch 100 kmph in 5.1 seconds.

Hyundai Motor Corporation has clearly spelt out its electric vehicle (EV) ambitions for the world with a sales target of 1.87 million units each year by 2030. It is an ambitious figure but Hyundai appears to be on the right path with its upcoming Ioniq 6 electric sedan getting over 37,000 preorders within just 24 hours of the reservation window being opened for South Korean customers.

Hyundai is betting big with its Ioniq EV models with the Ioniq 5 currently leading the charge, metaphorically speaking. But while the Hyundai Ioniq 5 is offered in several big markets and is also coming to Indian shores later this year, the Ioniq 6 is playing an even bigger game. Its preorder number is higher than the 23,760 preorders in 24 hours that Ioniq 5 received in South Korea when reservations for this model was previously opened.

At present, Hyundai is also planning to offer Ioniq 6 in select European markets as well as in the United States. And if the response from the South Korean market is a sign, units of the electric sedan may be lapped up by customers here as well. With good reason, of course. 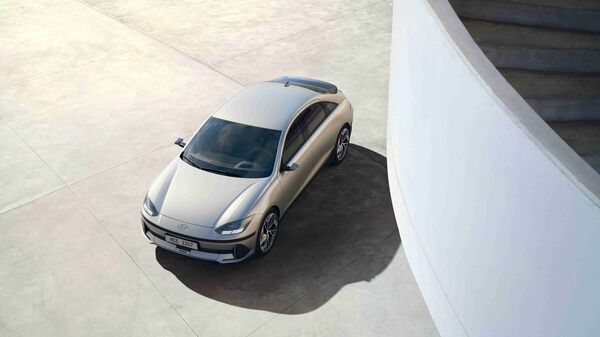 The Hyundai Ioniq 6 is longer, has a longer wheelbase, is wider as well as taller than the Tesla Model 3.

Unveiled at the Busan Motor Show back in July, the Hyundai Ioniq 6 is also based on the company's E-GMP platform, much like all other Ioniq models. Pricing in South Korea starts at around 87,685,000 won which is approximately ₹31.20 lakh. It is being made available with two drivetrain options.

The lower version of Hyundai Ioniq 6 gets a single motor and rear-wheel drive setup. The top-end version is offered with a dual motor and all-wheel drive configuration. It can accelerate from 0 to 100 kmph in 5.1 seconds.

The Hyundai Ioniq 6 is looking at taking on the likes of Tesla Model 3, BMW i4 and Polestar 2. In South Korea, it may have the edge of Tesla because the American EV maker currently imports units here and has no manufacturing facility in South Korea yet.