The newly inaugurated Akrudi EV plant will help Bajaj Auto to match up with the growing demand for its electric scooters.
By : HT Auto Desk
| Updated on: 11 Jun 2022, 07:56 AM 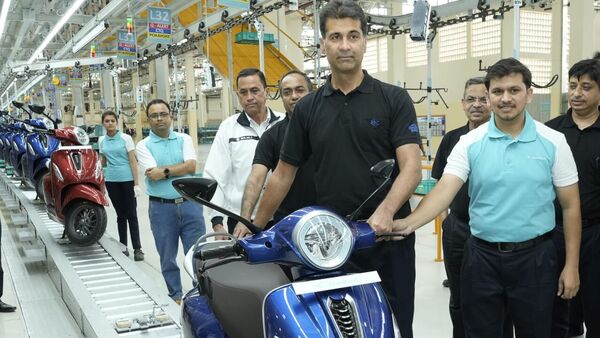 Bajaj Auto has announced the inauguration of its newly built EV manufacturing plant at Pune’s Akurdi.

Bajaj Auto has announced the inauguration of its newly built EV manufacturing plant at Pune’s Akurdi. The company added that the new facility has been augurated on the birth anniversary (June 10) of the late Shri Rahul Bajaj. Bajaj had previously rolled out the first Chetak in 1970s from Akrudi only. The same scooter then went on to become an icon and a fairly common name across Indian homes.

In 2019, the company reintroduced the Chetak in the form of an electric scooter and ever since the company has managed to launch the two-wheeler across several Indian cities in a phased manner. While the overall sales has crossed 14,000 units, the company has about 16,000 bookings in the pipeline. “Chetak is the original ‘Make in India’ superstar, which won hearts worldwide. True to those designed-and-built-in-India roots, the electric avatar of Chetak is born out of our strong R&D, deep understanding of products & consumers, and decades of manufacturing expertise," said Rajiv Bajaj, Chairman – Chetak Technology.

The newly inaugurated plant will help the company to match up with the growing demand for its electric scooter. Based on the demand, the plant’s capacity can be swiftly expanded to manufacture 500,000 electric two-wheelers per annum, the company noted in a recent press release. “On the 84th birthday of Bajaj Auto’s late Chairman Emeritus Shri Rahul Bajaj, we have delivered on our commitment to commission this centre of excellence for Chetak by June 2022. This focused, integrated and agile facility is intended to power the Chetak’s ride back to the future," said Bajaj.

Chetak Technology Ltd and its vendor partners have promised to be investing nearly ₹750 crores in the new plant. This facility spreads over half a million square feet and is expected to generate employment for 11,000 people. This will also be home to the company's future electric vehicle lineup.