The Lotus Exige swerves, hits side barrier, takes to the air before slamming against a light post sideways. The occupants of the vehicle, however, escaped with only minor injuries.
By : HT Auto Desk
| Updated on: 03 Feb 2022, 10:35 AM 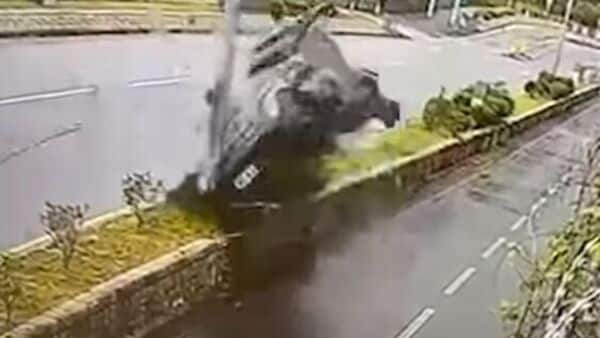 In one of the most horrific incidents of car crash you are likely to see on tape, a driver of a Lotus Exige two-door sports car in Hong Kong lost control of the vehicle and it swerved before hitting a light post on its side. While it may appear from the CCTV footage that an escape from the accident is impossible, the occupants did reportedly manage to come out of the entire incident with only minor injuries.

While the exact reason for the accident is not yet known, reports say the driver said he lost control of the vehicle. Once the car began to swerve, there was no real way for the driver to prevent the car from hitting the side barrier besides the road, taking off and slamming against the light post. The Lotus was left in a horrible wreckage with body parts flying all around. At the time of the incident, there was a driver and a co-passenger on the front seat.

Subsequent - and rather surreal - images on social media sites show the occupants - the driver is believed to be 42 years old while the passenger is aged 28 - checking their phones even as rescue workers came to the scene to assist.  Subsequent medical treatment reportedly had both complaining of neck and chest pain.

Experts point to several factors that may have helped the two passengers come out mostly unscathed despite the sheer intensity of the crash. One important factor could be the solid build of the vehicle itself, complete with its safety features. The other crucial element is that both passengers were wearing seat belts. Another reason is that the light pole didn't get uprooted which means the trajectory of the vehicle was halted. It is safe to assume though that the Lotus Exige is damaged beyond the scope of any repairs.