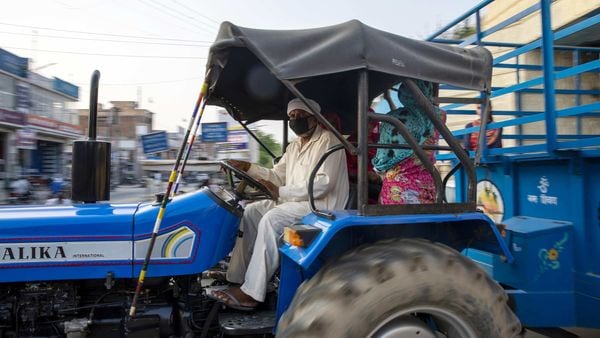 A man wears a protective mask while driving a tractor in Gharaunda, Haryana, India on Friday, June 26, 2020. From March through May, around 10 million migrant workers fled India�s megacities, afraid to be unemployed, hungry and far from family during the world�s biggest anti-Covid lockdown. Migrant workers aren�t expected to return to the cities as long as the virus is spreading and work is uncertain. Photographer: Prashanth Vishwanathan/Bloomberg

India’s hinterland is witnessing a consumption revival, which at first glance looks like good news for Asia’s third-largest economy.

Sales of motorcycles and tractors are near or above pre-pandemic levels, helping fuel a rally in Hero MotoCorp Ltd, India’s top motorcycle maker. Shares of farm-equipment maker Mahindra & Mahindra Ltd. have doubled since the end of March.

Part of that recovery is due to increased cash flows in rural areas thanks to good rainfall, robust crop output, and government handouts to workers and farmers to offset the coronavirus crisis.

But even with rural areas home to 70% of the nation’s 1.3-billion people and contributing roughly half of India’s gross domestic product, the $2.7 trillion economy is still expected to contract for the first time in more than four decades. That’s because rising farm incomes don’t appear widespread and non-farm workers worried about job losses aren’t spending.

“Let’s not exaggerate that higher income will lead to everyone buying and spending," said Madan Sabnavis, chief economist at Care Ratings Ltd. in Mumbai. “It may not happen because even if the income may go up, my ability to spend may not."

Preliminary calculations suggest that farmers’ earnings per hectare of wheat -- one of India’s two main crops -- will increase by about 9% to 16,017.96 rupees ($214) this year. That’s based on an estimated crop area of 33.4 million hectares and total output of 107 million tons, and assuming that cost of production stays unchanged from a year ago.

After accounting for inflation, those gains will be meagre at best in a country where 93 million hectares of the total 140 million-hectare agriculture land come in sizes of less than one hectare, leaving farmers with little to invest in mechanisation or spend to revive demand in the economy.

Mahindra’s June tractor sales jumped 47% month-on-month to 35,844 units, but the growth was a modest 8% from a year ago - a period when sales had been damped by a protracted economic slowdown. It’s similar with Hero’s numbers: sales of 450,744 units represent a more than four-fold growth from a month ago, but are 27% lower than a year ago. ​

(Also read: How good monsoon in India can arrest slide in tractor sales)

The rally in tractor and motorcycle makers helped to spur a nearly 44% gain in the S&P BSE Sensex from its lows touched in March. For the year, the index is still down 9.3%, with the wider NSE Nifty 500 index mirroring the trend.

“India’s stock market has bounced sharply from its lows earlier this year, even as the economy looks increasingly set for a prolonged U-shaped slump. Our analysis of earnings call transcripts of 70 Nifty 500 firms points to a significant room for disappointment that could damp stock market optimism."

To ease the pain in farm areas, Prime Minister Narendra Modi’s government increased this year’s allocation for a rural jobs program. But those jobs pay just 202 rupees a day -- lower than the officially prescribed minimum wage of 347 rupees a day for unskilled farm labor -- and is seen doing little to drive demand in India’s consumption-led economy.

“Rural growth will only keep the overall growth from slipping further," said Dharmakirti Joshi, chief economist at Crisil Ltd. “If urban doesn’t perform it will spill over."