The 2014 NGT order banned diesel vehicles older than 10 years in Delhi-NCR. This includes tractors.Farmer leader Rakesh Tikait says many in farming community are upset over this order.
By : PTI
| Updated on: 08 Feb 2021, 09:01 AM 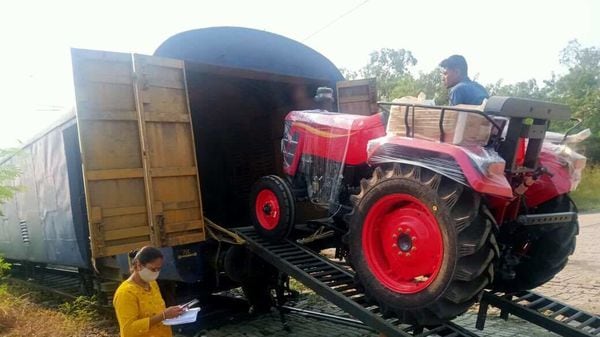 A Mahindra tractor being driven into a railway carriage. (Photo courtesy: Twitter handle of Piyush Goyal)

Farmers protesting against the Centre's new agricultural laws are rallying behind the call for a 'tractor revolution', while expressing disappointment over a 2014 NGT order banning diesel vehicles, including tractors, older than 10 years in Delhi-NCR.

'Tractor Kranti (revolution)' became a buzz word after farmer leader Rakesh Tikait's call on Saturday for mobilising support of tractor-owners for the ongoing stir against the contentious agri-marketing laws.

During a speech to supporters at the Ghazipur protest site Saturday, Tikait reached out to the farming community, many of whom, especially in the Delhi NCR, have been upset over the National Green Tribunal's order.

The November 26, 2014 order of the National Green Tribunal (NGT) stated that any petrol vehicle older than 15 years and diesel one older than 10 years shall not be permitted to ply on the roads in Delhi-NCR.

Among others, farmers in western Uttar Pradesh districts like Muzaffarnagar, Baghpat, Hapur, Shamli and Meerut have been apprehensive of the decision.

"As per this order, my tractor which I bought eight years ago will go out of use after two years or at max, after seven years if the 15-year rule is imposed. It will be a huge loss," Muzaffarnagar resident Vikas Kadiyan, who owns 40 bigha land, told PTI over the phone.

The NGT order came into focus again after Finance Minister Nirmala Sitharaman in her budget speech on February 1 announced the much-awaited voluntary vehicle scrapping policy to phase out old and polluting vehicles.

Sitharaman had said that under voluntary vehicle scrapping policy, personal vehicles would undergo a fitness test after 20 years while commercial vehicles would require it after completion of 15 years. Other fine details about the policy are still awaited.

Opposing the NGT order, Tikait had told the crowd on Saturday, "The tractors which run in the farms will now run at the NGT’s office in Delhi also. Until recently, they had not asked which vehicles are 10 years old. What is their plan? Phase out tractors older than 10 years and help the corporates? But the tractors older than 10 years will also run, and the movement (for repeal of the new farm laws) will also be strengthened."

He said more and more farmers across the country will participate in the ongoing farmers’ stir for rollback of the contentious farm laws.

"Recently, 20,000 tractors were in Delhi and the next target is taking that number to 40 lakh," Tikait had said.

(Also read - No country for old vehicles: All you need to know about scrappage policy)

The order’s implications have been felt far and wide in parts of the national capital region, which altogether comprises 23 districts from the three states of Haryana, UP, Rajasthan and the entire national capital territory of Delhi, spanning about 55,083 sq km, according to the NCR planning board.

Farmers say that a one-line response to the decision is not easy and suggest that a broader perspective is required to order phasing out of tractors. Not all farmers can afford to buy new tractors, and the old ones are generally 15 to 20 years old, they say.

"Before such a decision is implemented, it would have been better if the NGT had asked the government in Delhi to replace all their old vehicles and see how difficult and expensive the process could be. Also, train engines running on diesel should be stopped and aircraft stopped in Delhi, if environment is the real concern," the 38-year-old Kadiyan said.

Farmers say tractors are not only used for tilling farmlands but also in transportation e.g. carrying sugarcane to sugar mills in western UP.

Instead of a blanket ban, the status of vehicles could be checked individually and documents like Pollution Under Control (PUC) certificate be reviewed to decide which ones should go off the roads, they added.

Manji Singh Rai, the President of Bhartiya Kisan Union (Doaba) said, "Tractors are like our sons. We don't drive tractors in the city. We work with them in the fields. Farmers use tractors for 20-25 years. They do not have money to buy new ones."

"If the government is so concerned about old vehicles, it should provide new tractors to the farmers," he said about government's proposed vehicle scrapping policy.

Ranjit Singh, a farmer protester from Monga, said, "The government brings only those laws that are against the farmers. Tractor is not just a machinery for us, it's like a family member for us that helps us earn our livelihood.

"The tractors run fine for 20 years. With a little more care and maintenance, they can be used for 25-30 years."