This truck drives itself entirely, may help long-haul drivers take it easy 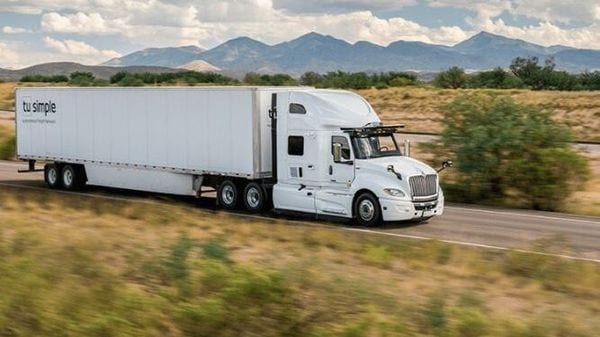 Autonomous vehicles are widely seen as the next major technological breakthrough in the world of mobility and while four-wheeled vehicles are already out on roads minding their own drive - rules permitting of course, the world may soon have trucks doing the exact same with no need for a driver to control the steering. This after US-based TuSimple completed the first no-human road test if its autonomous truck.

According to an Associated Press report, TuSimple conducted what it claims to be the first successful fully-autonomous drive test of a class 8 vehicle when the semitruck managed to drive itself on a 130 kms stretch in Arizona. The test was conducted with the approval and under the supervision of Arizona Department of Transportation and local law enforcement officials.

How the autonomous truck made its way

The same report states that a lead vehicle was first deployed to scan the road for obstacles that were not accounted for. With a lead of eight kilometres, this vehicle was meant to report back any unexpected on-road obstacles. The autonomous truck came up next and was followed by another vehicle which was meant to take controls of the truck if required. Additionally, there were several unmarked cop cars too. Of note is that TuSimple says the autonomous vehicle drove along with other motorists at large on the road. "This test reinforces what we believe is our unique position at the forefront of autonomous trucking, delivering advanced driving technology at commercial scale," TuSimple CEO Cheng Lu was quoted as saying.

What does the test mean for future of trucking

There can be multiple benefits of further developing the autonomous technology for trucks. TuSimple believes that since drivers form 40% of the operational cost for trucking, autonomous vehicles can help bring this figure down significantly, even if it doesn't explain if drivers would end up - possibly, losing their jobs. What the company also highlights is the potential to save 10% on costs related to fuel when a truck is in autonomous mode compared to when it is being driven by a human. Then there is the possible advantage of the technology allowing drivers to take breaks when on the move, a crucial factor during long-distance journeys.