Home Auto News This Flying Car May Make Traffic History From 2023. And There's An India Connect

This flying car may make traffic history from 2023. And there's an India connect

The autonomous vehicle from LuftCar can be attached to a flying module and promises to have a top speed of around 220 miles per hour.
By : HT Auto Desk
| Updated on: 16 Nov 2021, 11:10 AM 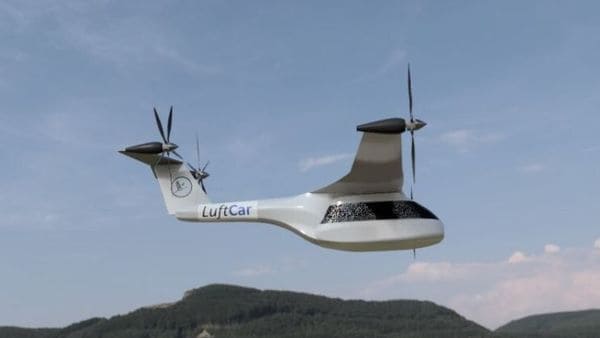 Flying cars have long been part of fictional tales that promise a future full of convenience and one that is free from existing headaches of worldly problems, most importantly traffic snarls. But the future may be almost here as a number of companies are working towards developing, or even putting finishing touches, to their respective flying vehicles. Among them is Florida-based LuftCar that reportedly plans to roll out its product by as early as 2023.

The autonomous vehicle from LuftCar can be attached to a flying module and promises to have a top speed of around 220 miles per hour (350 kmph) courtesy several factors including six propellers. It also promises to reach an altitude of around 4,000 feet and can travel around 150 miles (240 kms) in one go. And yet, it may as easily race on roads when not flying through clouds. Of course, the flying module will have to come off.

Powered by hydrogen, the pricing for the five-seater product will be around $350,000 and once launched, it will primarily be meant for big corporations and wealthy individuals requiring a quick ride option. There could also be a possible benefit of decongeting cities. “People will actually buy a small car and plane combined; hence they don‘t need to live in a congested city and travel from far-flung places to cities with ease," Santh Sathya, founder and CEO of LuftCar, was quoted as saying by Khaleej Times. “Businesses can also use this as a shared vehicle to go from city to city and without a need to rent a vehicle."

Sathya's LinkedIn profile reveals he is an alumni of Anna University before moving to the US for further studies. He has worked in various companies like Siemens, Johnson Controls and Boeing before starting LuftCar.

So will LuftCar flying vehicle make its way to the congested cities of India as well? There is no word yet on markets where the product will be offered initially although the company is currently participating in the Dubai Airshow 2021.