The Hyundai Sonata is the world's first car with Android Auto

Starting Tuesday, all new Sonatas sold in the US with a navigation system will come with Google\'s smartphone-mirroring technology on board as standard.
By : AFP
| Updated on: 27 May 2015, 02:41 PM 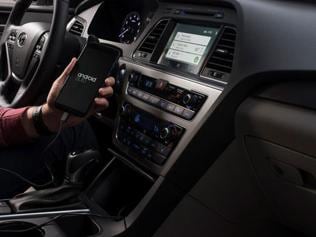 Starting Tuesday, all new Sonatas sold in the US with a navigation system will come with Google's smartphone-mirroring technology on board as standard.

And what's more, any existing owners of a 2015 Sonata can also activate Android Auto via a free software update.

Like Apple's Car Play, Google's Android Auto brings the best and most useful features of a smartphone safely to a car's dashboard including navigation, access to the music library, hands-free calling and turn-by-turn navigation.

Despite a huge fanfare, car companies have so far struggled to bring either Apple's or Google's systems to their production models, partly because they have been trying to develop in-car systems that support both technologies.

The first -- and so far only -- production car to go on sale with Apple Car Play pre-installed was the Ferrari FF and the Italian supercar firm has committed to bringing the technology to all of its future cars as they roll out of its state-of-the-art production facility.

Meanwhile mass-market manufacturers including Mercedes-Benz and Volkswagen have committed to supporting both platforms, plus the agnostic MirrorLink system which mates and mirrors content from any smartphone to a car's infotainment display.