3M’s Skotchkote Poly-Tech RG700 has so far been applied on over 100 rail coaches. The company claims it has aided passenger comfort, especially in non-AC coaches.The company claims that it can keep vehicles significantly cooler in summer months.
By : Shubhodeep Chakravarty
| Updated on: 26 May 2020, 19:18 PM 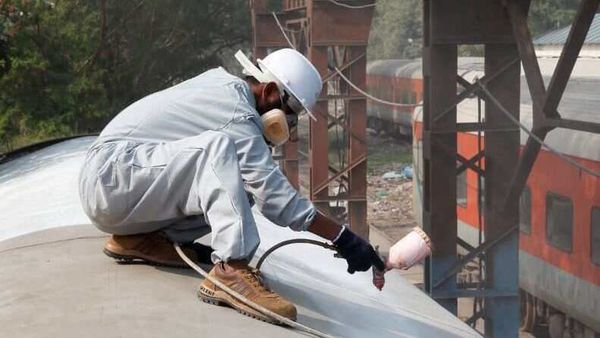 The 3M Scotchkote Poly-Tech RG 700 can be applied on various metallic and non-metallic substrates.

Cars parked outside under the glaring Indian summer sun can often be no less than a baking oven. While scores of people have little option but to get into such vehicles despite the significantly high cabin temperatures, they also potentially put themselves in harm's way with health hazards repeatedly highlighted in several studies. Besides, surfaces such as seats, steering and dash can be scorching to touch as well. To mitigate the woes of a baking car, 3M recently announced that its R&D team has developed a first-of-its kind solar reflective coating.

The 3M Scotchkote Poly-Tech RG 700 can be applied on various metallic and non-metallic substrates, and the company claims it can help in keeping the temperature inside the cabin of vehicle lower than what it would have otherwise been. The company has further stated that the 3M Scotchkote found mention in ‘World Changing Idea’ by Fast Company and it was found that it reduced temperature inside train coaches by 15%, thereby increasing comfort levels of passengers in non-AC coaches.

3M’s Skotchkote Poly-Tech RG700 has so far been applied in over 100 rail coaches. "It is estimated that if applied over 15,000 rail coaches in India’s large rail network, this solution can save up to 162 thousand megawatts of electricity which converts to reduction in the amount of CO2 released by almost 132 thousand tonnes per year," the company informs. "This could potentially save approximately $15 million per year in energy costs or reduce it by 17%."

The scope of application can also be extended to personal and public vehicles, and 3M teams are scaling up production. Besides use in automotive sector -vehicle exteriors and two-wheeler covers, the company claims that it can also be used in chemical plants, industrial shed roofing, LPG storage tanks, pipelines and outdoor enclosures with electronic components.