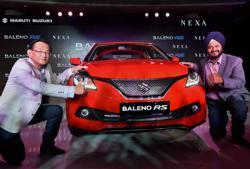 Maruti Suzuki India retained its leadership position in the domestic passenger vehicle market last month, with six of its models featuring in the top 10 selling brands.

The company, which had five models in the top 10 selling passenger vehicles (PVs) list in February 2016, is driving towards a 50% market share in the segment.

According to the latest data from the Society of Indian Automobile Manufacturers (SIAM), Maruti's Alto retained the best-selling model tag last month with 19,524 units as against 21,286 in February 2016.

The company's compact sedan Dzire was second with 14,039 units compared with 13,888 in February last year.

Compact car Wagon R was third, selling 13,555 units. The vehicle was in the also in third slot in the year-ago period with sales of 14,209 units.

Hyundai's hatchback Grand i10 came in at fourth position with 12,862 units in February. It was sixth in February last year with sales of 8,898 units.

MSI's premium hatchback Swift came in at fifth position with 12,328 units in February. It was second in February last year with sales of 15,475 units.

Mahindra's Bolero and MSI's Omni failed to make it to the top 10 last month. They had featured in the top ten passenger vehicles list in the same period last year.