Inspired by the world water-speed record-breaking exploits of Sir Malcolm Campbell, the new collection of convertibles showcase the levels of craftsmanship and attention to detail that set Rolls-Royce apart from all other companies in the luxury car market.
By : AFP
| Updated on: 19 May 2014, 10:46 AM

Inspired by the world water-speed record-breaking exploits of Sir Malcolm Campbell, the new collection of convertibles showcase the levels of craftsmanship and attention to detail that set Rolls-Royce apart from all other companies in the luxury car market.

The Rolls-Royce Phantom Drophead Coupé Waterspeed Collection is a special bespoke series that will only ever run to 35 examples, each of which will be finished in a special 'Maggiore Blue'. It's a color developed to pay homage to the Bluebird K3, Campbell's famous Rolls-Royce powered watercraft that on September 2, 1937 hit a top speed of 129.5mph (208.41km) across Lake Maggiore on the Italian-Swiss border. The run set a new world waterspeed record. 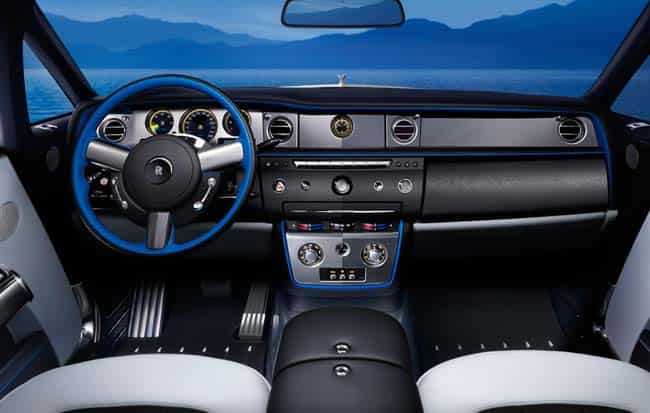 And with the Waterspeed Collection, Rolls-Royce looks like it's trying to set records too. The Maggiore Blue paint is applied in nine layers and then is sanded back by hand to ensure a perfect surface to receive the finishing lacquered coat. But it doesn't stop there, as the company's master coachline painter (what US customers would call a pin-striper) then spends four hours adding coachlines and Bluebird motifs.

The Phantom Drophead usually comes with a teak decking cover that raises to receive the roof when the top is down, but this has been replaced, for the first time, by brushed steel. However, each panel of this steel is hand beaten into shape, a task that takes 70 hours, then the brushed finish is also achieved by hand, adding a further 10 hours on to the process.

Inside, the doors feature hand engraving and there is prodigious use of Abachi wood. Chosen for its special qualities -- it's cool to the touch and has a satin-like finish -- it is the first time the material has ever featured in a factory-built Rolls-Royce. 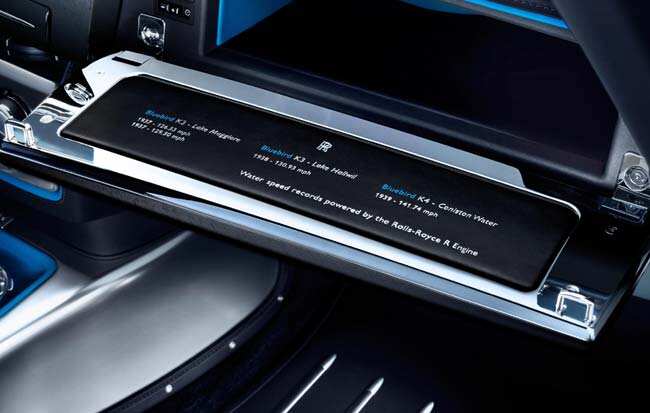 As a finishing touch, there's a hand-embroidered panel on the glovebox which lists all of the records Campbell achieved at Lake Maggiore and Coniston Water.

'This very special motor car serves to pay a perfect homage to my grandfather's remarkable acts of British daring and endeavor,' said Donald Wales, grandson of Sir Malcolm Campbell. 'The extraordinary attention to detail and commitment to engineering excellence so evident in these motor cars perfectly echoes the lengths my grandfather and his colleagues went to in their pursuit of the waterspeed records.'

The car will be revealed in Chelsea, London on Tuesday in front of an exclusive audience of invited guests on May 13 and will make its first public appearance at the Concorso d'Eleganza at the Villa D'Este classic car show in Italy on May 23.