The Frankfurt Motor Show in Germany will be the perfect occasion for Renault to unveil the latest generation of its Mégane and to premiere the Talisman, its new family-sized sedan.
By : AFP
| Updated on: 03 Sep 2015, 09:23 PM 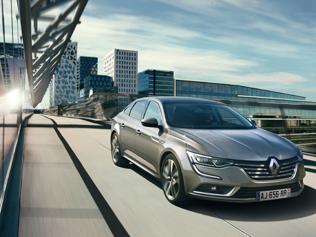 The Talisman will be a highlight of the Renault stand at the 2015 Frankfurt Motor Show. Photo:AFP

The Frankfurt Motor Show in Germany will be the perfect occasion for Renault to unveil the latest generation of its Mégane and to premiere the Talisman, its new family-sized sedan.

The world premiere of the new Mégane IV could turn out to be a highlight of the Frankfurt Motor Show, especially since Renault has yet to communicate any information on the subject to the public. This new generation vehicle could turn out to be more aggressive and sporty than the previous generation in its design. The vehicle will likely feature the latest engine technology of the French manufacturer, both in gas and diesel formats. An Estate and RS version should soon follow.

Unveiling of the Talisman

The German motor show will also stage the official presentation of an entirely new model: the Talisman. Talisman is the name given to the new family-oriented D-segment sedan that replaces the Laguna and that Renault introduced at the beginning of the summer. The new model will be fitted with five engines (two gas and three diesel) with reduced fuel consumption and CO2 emissions. From the outside, the Talisman presents an original system of lighting with full LED headlights and the vehicle's tail lights continuously on. The family sedan will also benefit from the R-Link 2 infotainment system via an 8.7-inch touch screen as well as its integrated Multi-Sense system that allows an innovative customization mode to control the technologies installed in the vehicle. The sedan and its Estate counterpart will also have more interior space. The public will be able to check out the vehicles at the Frankfurt show. Talisman is set to start arriving in dealerships in continental European markets before the end of 2015.

Listed in the brand's catalogue, the new Espace and Kadjar models will also be displayed at the Renault stand.

A few new developments at Dacia

Only a few developments on the Dacia front. For the first time, the car manufacturer will introduce a two-pedal option on the Logan, the Logan MCV, Sandero and Sandero Stepway thanks to its electronically-controlled gearbox system, Easy-R. In other developments, the 2016 Duster will be equipped with a few new updates.