The fourth generation of Renault\'s popular compact hatchback and sedan has been unveiled in images ahead of its Frankfurt motoshow debut
By : AFP
| Updated on: 10 Sep 2015, 04:34 PM 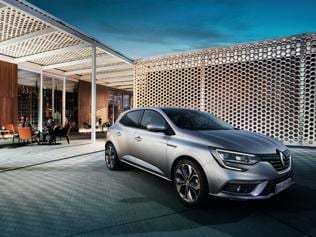 Since its launch in 1995, the Mégane has managed to clock up sales in excess of 6.5 million. However, over that time the landscape and the competition has changed immensely and the car that once offered an unparalleled combination of style and safety in its class is now struggling to stand out against the competition.

That's why the new car is lower to the ground, longer and wider and has a more balanced profile. The fact that the designers have purposely put a wheel at each corner gives the car a sporting appearance and to emphasise this sense of dynamism, a performance 'GT' version will be available from launch. 'On the highly competitive market of compact saloons, it was vital that New Mégane should stand out right from the first glance', said exterior designer Franck Le Gall of the car's exterior styling.

Renault is keeping performance data and interior fittings a secret for the moment but all will be revealed at the Frankfurt motorshow, which opens its doors to the press on September 15.