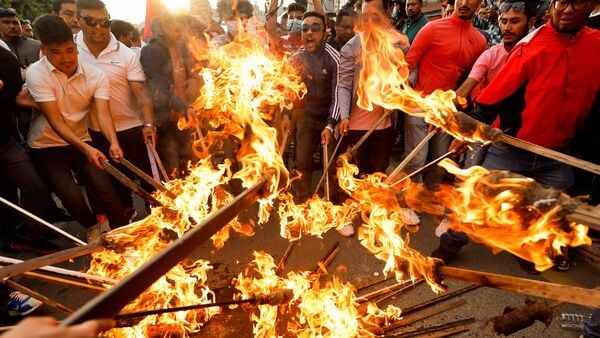 Demonstrators affiliated with the main opposition take part in a torch rally during the protest against the rise in fuel prices in Kathmandu, Nepal.

The decision to hike prices of petrol and diesel in the country has led to massive protests in Nepal with members of the Youth Association of Nepal and the Youth Union belonging to the opposition Communist Party of Nepal-Unified Marxist Leninist (CPN-UML) hitting the streets to vent their anger. Petrol prices were hiked by 12 per cent while diesel prices received an upward revision by 16 per cent earlier this week.

NOC, on its part, has blamed the Russia-Ukraine war as the only reason for fuel price fluctuations in the international market and clarified that the recent hikes in the country is due to price adjustments made accordingly. It is important to note here that the Indian Oil Corporation is the only supplier of fuel to NOC. As per a previous report in the Hindustan Times, IOC imports petrol for Nepal from Gulf countries as per an old treaty and it is sold at cost price with only refinery fees charged. This is primarily why fuel prices Nepal in recent times have been cheaper than rates in most parts of India where numerous central and state taxes and levies determine the final selling price.

In the past, there have been instances of cheaper fuel from Nepal being illegally smuggled into India and then being sold to small-time retailers in states like Bihar. While police action here has reportedly been increased to check on such instances, the latest price revision in Nepal is more than likely to put a complete stop to this.