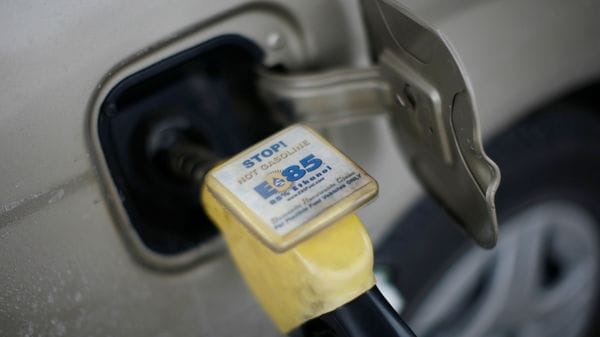 According to NITI Aayog, initially, the pan-India ethanol production capacity will be raised from the current 700 crore litres to 1500 crore litres.. (Representational image)

The NITI Aayog on Monday released the annual plan for the gradual rollout of E20 ethanol in the country which will result in saving ₹30,000 crore of foreign exchange per year among other benefits.

Prime Minister Narendra Modi on June 5, 2021, released the report of the expert committee on 'Roadmap for Ethanol Blending in India by 2025'.

The inter-ministerial committee was headed by Dr Rakesh Sarwal, Additional Secretary, NITI Aayog. The committee had representatives from the Ministries of Petroleum, Food and Public Distribution, Road Transport and Highways, Heavy Industry; and Indian Oil Corporation and Automotive Research Association of India.

NITI Aayog said the government will encourage the use of water-sparing crops, such as maize, to produce ethanol. Technologies for the production of ethanol from the non-food feedstock will be promoted.

Other recommendations include expediting regulatory clearances for ethanol distilleries through a single-window mechanism, unrestricted movement of denatured ethanol all over the country, tax incentives for blended fuel and petrol vehicles.

Prime Minister Narendra Modi on Saturday had said ethanol has become one of the major priorities of 21st century India and the country has taken a big step towards the sector.

Addressing a virtual meeting on Word Environment Day, Prime Minister Narendra Modi said, "Today, on the occasion of World Environment Day, India has taken another big step. A detailed roadmap for the development of the ethanol sector has just been released. An ambitious E-100 pilot project related to the production and distribution of ethanol across the country has also been launched in Pune. Now ethanol has become one of the major priorities of 21st century India."

"Until 7-8 years ago, ethanol was rarely discussed in the country. The focus on ethanol is having a better impact on the environment as well as on the lives of farmers. Today we have resolved to meet the target of 20% ethanol blending in petrol by 2025," Prime Minister Modi added.