Automakers Nissan, Skoda and Isuzu Motors have reduced prices of passenger vehicles in India by up to Rs 2.4 lakh to pass on GST benefit to customers.
By : New Delhi
| Updated on: 07 Jul 2017, 01:47 PM 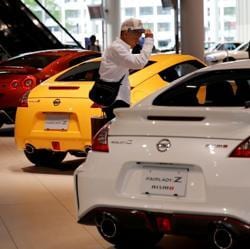 A man walks in the Nissan showroom at the carmaker's headquarters in Yokohama.

Automakers Nissan, Skoda and Isuzu Motors have reduced prices of passenger vehicles in India by up to ₹2.4 lakh to pass on GST benefit to customers.

Similarly, Tata Motors has also cut prices of its commercial vehicles, while Bajaj Auto's Austrian arm KTM dropped prices of its sports bikes in the country.

Japanese automaker Nissan announced reduction in prices of its vehicles, including the Datsun brand, by an average of 3 % in the country.

"The implementation of the GST is a positive move for both automobile manufacturers and customers. We are happy to pass on the benefits to our customers for a more attractive value proposition," Nissan Motor India MD Arun Malhotra said in a statement.

The company sells a range of vehicles under Nissan and Datsun brands, ranging from hatchback RediGo to SUV Terrano, in Indian market.

Czech car maker Skoda reduced prices of Superb model range by up to 7.3 % in Mumbai, resulting into a price benefit of up to 2.4 lakh.

The revision in the Octavia model range varies from 4.9 % and 7.4 %, resulting in a maximum benefit of ₹1.75 lakh, the company said.

Similarly, Tata Motors cut prices of its commercial vehicles by up to 8.2 %.

Tata Motors, which is the largest commercial vehicle player in the country, has already reduced price of its passenger vehicles by up to ₹2.17 lakh.

Bajaj Auto's Austrian arm KTM has reduced the prices of bikes by up to ₹8,600.

The company said the rate of reduction varies across locations depending on the VAT rates applicable prior to GST.