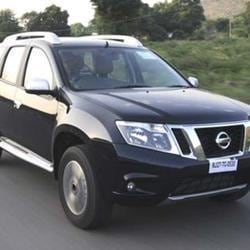 The new Terrano isn't much different from the old one launched in October 2013 but has 22 minor changes. Nissan has worked more on the interiors to match the compact-SUV segment competition from Hyundai Creta and Maruti Suzuki Vitara Brezza.

Here are the prices:

There's more chrome on the front grille and L-shaped LED DRLs. But no work has been done upon elsewhere.

With the new safety norms all set to kick in by October, Nissan has offered airbags, electronic brakeforce distribution, antilock braking systems and electronic stability control as standard in the new Terrano.

To make it smarter, Nissan has updated the new cabin with a 7.0 touchscreen infotainment for music and navigation, cruise control and other enhancements in the dual-tone interiors.

But under its skin, Terrano remains what it was: A 1.6-litre petrol engine mated to 5-speed manual gearbox and a 1.5-litre diesel motor connected to either a 5-speed manual or a 6-speed AMT gearbox.

Nissan Terrano hasn't received as much fame as it's twin sibling Renault Duster. Nissan India Operations president Guillaume Sicard said the company is going strong in the direction it aimed. "Nissan is a global brand and Datsun will serve to the masses. We're happy with the distinct progress both the brands have made in India."

Sicard also revealed Nissan's plans to introduce 8 new cars by 2021, including a hot hatch and a premium SUV placed between Terrano and X-Trail in the Nissan portfolio.

The company had already revealed it will phase out the Micra hatchback and Sunny sedan by 2021, from the Indian market. "Micra will continue to be exported from India until much longer," the Nissan India boss said.