Home Auto New Audi S8 Plus Is The Fastest In History

New Audi S8 plus is the fastest in history

Technicians have taken Audi's flagship executive sedan and managed to coax an extra 84bhp out of its already potent V8 engine.
By : AFP
| Updated on: 06 Aug 2015, 04:51 PM 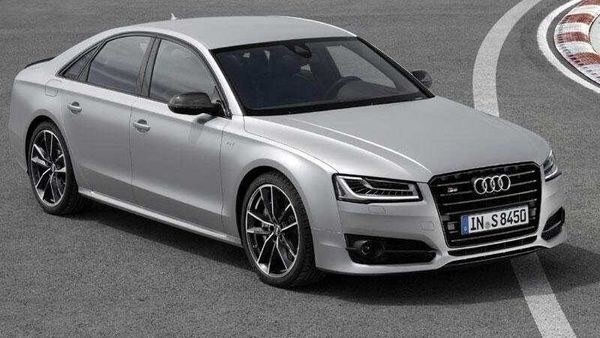 Technicians have taken Audi's flagship executive sedan and managed to coax an extra 84bhp out of its already potent V8 engine.

The results are remarkable. The S8 plus is a car that can carry five in absolute luxury even at speeds of up to 189mph and one capable of going from 0-100kph in just 3.8 seconds.

To put those figures into some kind of context, the new Audi S8 plus is faster off the mark and has a higher top speed than a current-generation Porsche 911 Carrera.

But those numbers also mean that despite is huge size -- the car's over 5 meters long and just under 2 meters wide -- its 597bhp 4-liter 8V engine makes it the fastest S-designated Audi in the company's current range.

Yet, even with those supercar-baiting levels of performance, the car shouldn't leave owners shaken and stirred. It has permanent Quattro four-wheel drive for assured grip whatever the conditions and clever adaptive air suspension that responds to how the car's being steered in order to optimize handling and comfort. It also gets carbon ceramic brakes as standard and sits on special 21-inch alloy wheels that will help distinguish the S8 plus from the 'standard' S8 and the A8 models.

Other unique exterior features include a carbon fiber blade on the front apron spoiler, carbon fiber flaps on the air inlets and a special trunk lip spoiler. As an optional extra, the wing mirror housings and rear spoiler can be specified in carbon fiber, too.

The S8 plus also comes with Matrix LED headlights as standard, which offer a wide area of bright illumination but won't dazzle or glare oncoming drivers, plus darkened rear lamps for extra menace. What's more, Audi has developed a special matte paint finish called Floret Silver that will be exclusive to the model.

Meanwhile, safety and assistance features include an advanced parking system which incorporates a top view camera and adaptive cruise control.

The S8 Plus will be available to order from October.