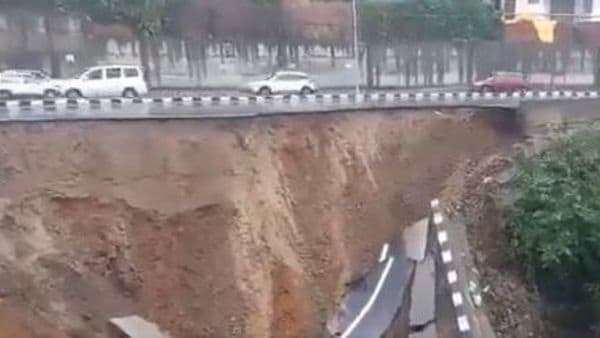 The damaged part of the NH 415 in Arunachal Pradesh. (Image: Twitter/Hindustan Times)

A horrifying video of the national highway collapsing in Arunachal Pradesh has surfaced online. The video has been posted on the Twitter account of the Hindustan Times.

The dramatic visuals show how one portion of the National Highway 415 collapses after heavy rainfall. The video also shows how several cars have narrowly escaped a major mishap there. During the accident, vehicle movement was briefly stopped there.

Arunachal Pradesh: A portion of the National Highway-415, collapses after heavy rainfall.

The National Highway 415 is the lifeline of Arunachal Pradesh's capital Itanagar. The portion of the road that collapsed was totally washed away. No casualties have been reported though.

On the other side of the road, the video showed, cars briefly stopped to see what was happening but then sped away.

Arunachal Pradesh has witnessed incessant rainfall for the last few days. This resulted in a flood-like situation in Itanagar on Monday. The massive rainfall and resulting flood have damaged several buildings and other infrastructures as well.

Several other locations of Itanagar has reported waterlogging and landslides.