Two young boys lost their lives when the driver of a Mustang lost control of the vehicle and reportedly slammed against parked cars before hitting spectators.
By : HT Auto Desk
| Updated on: 25 Oct 2021, 11:16 AM 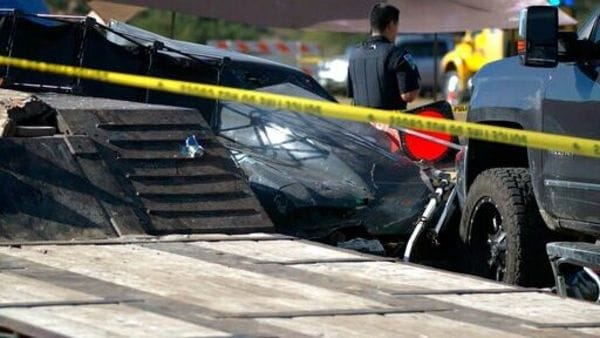 A police officer stands watch over the scene of a fatal drag racing crash at the Kerrville-Kerr County Airport in Kerrville, Texas.

In a horrific incident with a tragic ending, a driver behind the wheel of a Mustang lost control of the vehicle during a drag race and crashed into spectators. It is reported that two boys, aged eight and six, died in the accident.

The accident took place at a Texas airstrip which reportedly had no safety barriers for those who were in attendance here. Two vehicles lined up next to each other to participate in a drag race. Moments after the Mustang on the right began speeding down, it appeared to have lost control. Local police officials informed that the vehicle slammed into parked vehicles by the side before crashing into audience. As many as eight people were injured while the two young boys were killed. The driver is believed to have received minor injuries.

Local media reports state that the event was organized for amateur racers and that over 3,000 people had come to watch the races. There were no stands and no safety barriers as well. The spectators were reportedly precariously close to the dedicated section where the races were being organized. While all those in attendance were being asked to keep off the asphalt, there may not have been enough time to take evasive action when the Mustang in question veered off.

The entire incident is being investigated by Kerrville Police Department which issued a press statement informing that the injured are being treated at medical facilities in San Antonio and that its personnel are looking into the matter.