Out of the four Mahindra XUV700 SUVs that participated in the 24-hour Speed Endurance Challenge, the Diesel Manual variant lead the pack with 4384.73 km on record.The Mahindra XUV700 SUVs also broke additional 80 records during this challenge.
By : HT Auto Desk
| Updated on: 13 Oct 2021, 04:45 PM 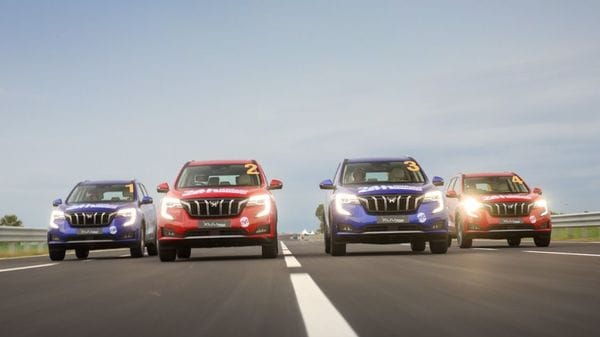 Four Mahindra XUV700 SUVs that entered the challenge clocked over 4000-km each in the event.

Mahindra XUV700 has set a new national record at the 24 hours Speed Endurance Challenge that took place at the carmaker's new SUV Proving Track (MSPT) near Chennai. Four XUV700 SUVs that entered the challenge clocked over 4000-km each in the event. The previous record set in the event was in 2016 and was for 3161 km.

Apart from the national record, the XUV700 SUV broke additional 80 additional records during this challenge at the MSPT where the vehicles drove at an average speed range of 170-180 km/h. The challenge took place under stringent regulations and observation of Federation of Motor Sports Clubs of India. It was organised by EVO India while the records were validated and verified by India Book of Records.

All the XUV700 SUV variants were put through one of the toughest tests ever as they were driven for 24 hours at a stretch at an astonishing speed range with only quick stopovers for refilling fuel or changing the driver. The SUVs were driven by some known auto enthusiasts from the automotive fraternity in the country.

Mahindra XUV700 SUVs proved their mettle and showcased the endurance and driving capabilities they posses. “The XUV700 was conceptualised, developed and built to a very high endurance standard and as expected it fared extremely well in this gruelling challenge," said Velusamy R, Chief of Global Product Development at Mahindra, who flagged-off the event.

Velusamy R added that the company is proud of its product that has set new benchmarks for endurance with new national records. “It is interesting to note that this achievement came at our very own world-class MSPT," he said.