Looking at Auto Expo 2020 as launching pad for revival in auto sector: SIAM

SIAM President Rajan Wadhera the slowdown witnessed by the auto sector in the past five successive quarters has had an impact on participation.
By : PTI
| Updated on: 21 Dec 2019, 01:43 PM 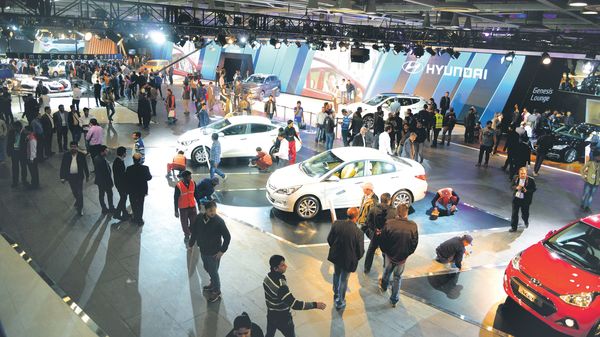 A file photo of an auto expo in Greater Noida. Considering the government’s push for green mobility, manufacturers this time around are expected to showcase a slew of electric and hybrid vehicles, and related concepts at the event.ramesh pathania/mint

Slowdown-hit auto industry is looking forward to the upcoming Auto Expo in February 2020 as the 'launching pad for revival' despite some big regular companies skipping the biennial motor show, SIAM said Friday.

Industry body Society of Indian Automobile Manufacturers (SIAM) said that over 60 new launches and unveilings of vehicles are expected at the expo to be held from February 5-12, where China's Great Wall Motor Company and First Automotive Works (FAW) will make their debut along with MG Motors India.

Holding the flag up for the industry are the likes of Maruti Suzuki, Hyundai, M&M, Tata Motors and Kia along with Skoda and Volkswagen brands, which are making a comeback after skipping the 2018 edition.

"Auto Expo 2020 will be the launching pad for the revival of the auto industry, we feel," SIAM President Rajan Wadhera told reporters here.

He said the slowdown witnessed by the auto sector in the past five successive quarters has had an impact on participation.

"Yes, some of the members would be missing -- currently occupied with responding to business challenges," Wadhera said adding that at one point, there were discussions of postponing the biennial event by a year.

"When there is de-growth, obviously there is an introspection. Should we, should we not... We were thinking of postponing it by one year. Then, we decided to go ahead. Collectively, most of us thought that it is wiser to go ahead with the Auto Expo than to postpone by one year," he said.

SIAM members felt that postponing the event "would be a disservice to both the stature of the nation as well as the aspiration of millions of customers", Wadhera added.

When production is down 30 per cent and plants are operating only at 70 per cent capacity, there is loss of money and some of the thoughts were "should you spend at that point in time when you know spending money is not going to generate demand to bring the customer, you have to take calls", he added.

Wadhera, however, said current signs are encouraging for the industry.

"There are positive signs of consumer sentiments improving, finance availability is going up and more people are committing to more new model launches. We feel that Auto Expo can add another enabler for the auto industry to come up, largely in the area of passenger vehicles," he said.

Main companies that command greater market share are participating, he said exuding optimism that the expo would be a success as they have a lot to offer to visitors and consumers.

The organisers have kept the ticket prices unchanged ranging from ₹350 to ₹750 and are expecting public visitors to cross the 6 lakh mark recorded in the last edition.

Wadhera said the main attractions of the expo will be clean vehicles, keeping in mind the BS-VI norms coming into effect from April 1, 2020, besides electric, hybrid and connected vehicles.