Home Auto News Kia Sells One Crore Cars In Us Market Since Debut, Ev6 In Red Is Milestone Unit 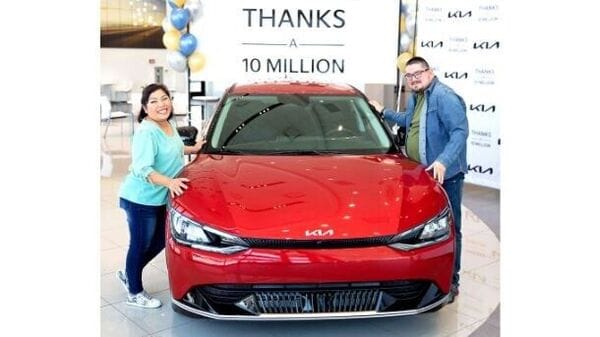 Customers of a new Kia EV6 celebrate their new purchase which was also a key milestone for the company in the US.

Kia recently hit the milestone of selling 10 million or one crore car units in the United States, a remarkable achievement also because the Korean brand had entered the market just around three decades ago and at a time when local as well as global rivals have and continue to be strong players. With a push towards electric mobility, it was also quite befitting that the 10 millionth Kia unit sold in the country was a shiny EV6 model.

Kia had entered the US market back in 1992 with just four dealerships in the city of Portland in Oregon. The Sephia was the first Kia model made available to American car buyers, followed by Sportage. The Sportage remains a strong player in the Kia portfolio even though the model list has expanded rapidly and now also includes the all-electric EV6 model.

Kia established its first big manufacturing facility in the US in 2006 with a plant coming up in Georgia and starting operations in 2010. It has since been a shift to top gear against some very formidable rivals. "Selling 10 million vehicles is a significant achievement and we at Kia are proud not only how far we’ve come, but also what the future has in store as we continue our push for sustainable mobility leadership," said Sean Yoon, President and CEO, Kia North America and Kia America. “To thank our customers for their support, Kia wants to give back in meaningful ways by helping those in need. We hope the positive impact of these donations will resonate for years to come."

At present, Kia sells models like Telluride, Soul, Seltos, Niro, Sportage, Sorento and Carnival, among others, in the US. With passing time though, there is a gaining focus on electric cars with the EV6 also gaining some very noticeable traction among American car buyers.