Introducing the transformed brand to the key market of the Middle East, Kia underlined the focus on evolving with changing times.
By : HT Auto Desk
| Updated on: 17 May 2021, 08:41 AM 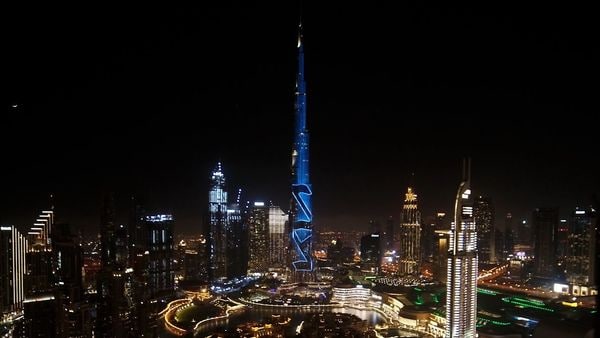 Kia Corporation recently celebrated its brand transformation in the Middle East by organizing a spectacular LED light show on the Burj Khalifa, the world's tallest structure at 828 metres. Introducing the transformed brand to the key market of the Middle East, Kia underlined the focus on evolving with changing times.

Kia has introduced its new slogan - Movement that inspires, and its new corporate logo, apart from also bringing in its first dedicated electric vehicle, the EV6, upon Burj Khalifa's LED façade. "The LED show in Dubai is our way of inspiring people to follow their dreams, and let them know that Kia is with them for the journey," said Artur Martins, Senior Vice President and Head of Global Brand and Customer Experience Division at Kia Corporation. "We believe movement inspires ideas, and we want to create a space for all of our customers to bring their ideas to life."

The South Korean car maker has already introduced its new corporate logo in several countries, including India, and is betting big on its products in the electric vehicle range to find favour in changing times. Ironically, fossil fuels have powered the growth in wealth of several countries in the Middle East but while electric vehicles may dent the fortunes of automotive fuel, these are also being widely seen as inevitable - here and elsewhere.

Kia plans to bring out as many as seven electric vehicles in seven years with a clear focus on a dominant role in the world of battery-powered vehicles. "By refocusing our business on electrification, we are aiming for BEVs to account for 25 percent of our total worldwide sales by 2029," Kia President and CEO Ho Sung Song has previously said. Under Kia’s ‘Plan S’ strategy, announced at the start of 2020, the brand plans to expand its BEV line-up to 11 models by 2025.