Residents of J&K purchasing vehicles from other states have to get these vehicles registered at nearest RTOs.A circular from J&K transport department makes note of increase in cars registered in Delhi, Haryana and Punjab plying on long term in J&K without proper authorization.
By : HT Auto Desk
| Updated on: 15 Jun 2021, 11:24 AM 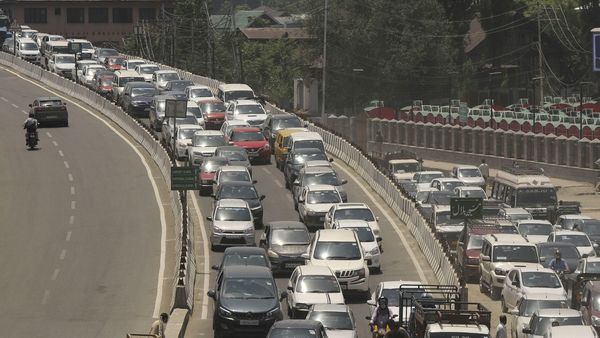 A traffic jam after markets partially opened due to lockdown relaxations, in Srinagar (File photo by Waseem Andrabi/Hindustan Times)

Residents of Jammu and Kashmir who purchase vehicles from outside the union territory and then use such vehicles within the state without registering these with local RTOs could now face strict and stringent action. This after the J&K transport department reportedly issued a circular in which it asked RTOs and ARTOs to comply with provisions in the amended Motor Vehicles Act and all other relevant rules.

According to reports, the transport department here has taken note of growing instances of vehicles from Punjab, Haryana and Delhi being used by locals in J&K. A circular issued by Hirdesh Kumar, Commissioner Secretary to the Government, Transport department, makes note of both new and pre-owned vehicles that are purchased from outside of J&K and then used here without proper documentation work.

As per a report in Greater Kashmir News Network, the circular highlights that not only does this cause a loss to the state exchequer but that such vehicles may also be used for unlawful activities. "It has been observed that considerable number of vehicles registered outside J&K have been purchased by the residents of J&K and are plying across unauthorisedly, without having been registered with the concerned registering authorities, in contravention to the explicit provisions of the Motor Vehicles Act, 1988, Central Motor Vehicles Rules, 1989," the circular reportedly reads. "It has been reported that a number of old vehicles purchased from outside J&K are also plying in J&K without paying token tax and road tax as required under J&K Motor Vehicles Taxation Act, 1957 and without the transfer of ownership in favour of purchaser (transferee) and the state exchequer is bereft of considerable amount on this account. There is a high probability of such vehicles being used for carrying unlawful activities."

It is mandatory for a local resident who purchases a vehicle from outside of J&K to get such vehicles registered with competent authority in the area in which he or she has residence or place of business.

In case of a vehicle registered outside of J&K, the owner of such vehicle will have 45 days from the date of transfer to contact the local authority.