Is recovery of German economy dependent on subsidizing profitable automakers?

While neither German Chancellor Angela Merkel’s bloc nor the SPD have much appetite for subsidizing profitable automakers, Economy Minister Peter Altmaier argues that the economy can only return to pre-crisis growth levels if the government helps this key sector.
By : Bloomberg
| Updated on: 02 Jun 2020, 05:06 PM 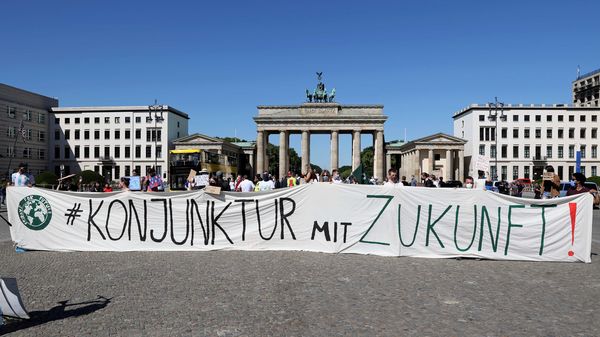 Protesters hold a banner reading "Economic activity with future!" during a demonstration against the planned state aid for Germany's automobile industry, amid the spread of the coronavirus disease (COVID-19), in front of the Brandenburg Gate in Berlin.

German Chancellor Angela Merkel will seek to broker a compromise Tuesday on a second stimulus package to help Europe’s biggest economy recover from the deep recession caused by the coronavirus.

Merkel’s government launched an initial shot of stimulus and guarantees in March to cushion consumers and businesses from the impact of the outbreak. Officials are now focusing on trying to bring the economy back from a contraction expected to exceed 6% this year, the deepest since the aftermath of World War II.

Merkel will host officials from the ruling coalition of her Christian Democratic-led bloc and the Social Democrats in Berlin from 2 p.m. local time. They’ll attempt to thrash out a deal on a plan worth between 50 billion euros ($56 billion) and 100 billion euros, a person with knowledge of the matter told Bloomberg last week.

The Social Democrats are pushing for spending closer to 100 billion euros, while Merkel’s group is keen to limit the amount of new debt, according to the person familiar. Merkel’s CDU also wants additional bridge loans worth 25 billion euros to help small and mid-sized companies weather the downturn, according to a party official with knowledge of the sticking points.

Both sides will have to narrow the gap on how to finance the package and on how to bail out communities struggling with evaporating tax revenue, the official said.

The total volume of the measures will be between 75 billion euros and 80 billion euros, with the federal government providing “significantly more than 60 billion" and regional governments the rest, Bild reported, citing unidentified government sources.

Here’s a closer look at a range of measures being considered, based on discussions with officials and lawmakers: 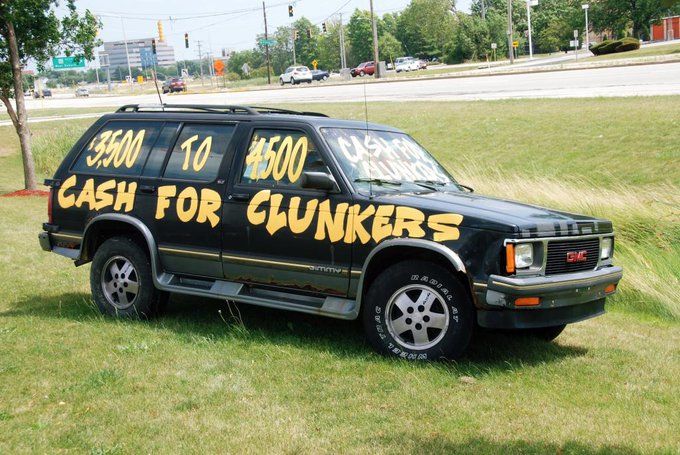 File photo for representational purpose. (This image was tweeted by @climateguyw

One of the most contentious issues is a possible sales bonus for the car industry. While neither Merkel’s bloc nor the SPD have much appetite for subsidizing profitable automakers, Economy Minister Peter Altmaier argues that the economy can only return to pre-crisis growth levels if the government helps this key sector.

(Also read: India all set to bring in vehicle scrappage policy: What it means)

The government is looking to introduce a sales bonus which encourages drivers to choose less-polluting vehicles, including low-emission diesel cars, a person familiar with the discussion said.

Altmaier, a member of Merkel’s bloc, is proposing bonuses for buyers of electric vehicles and conventionally powered cars which would expire at the end of the year, Reuters reported Sunday.

Under the plan, buyers would get a bonus of 2,500 euros per vehicle, with an extra 500 euros for fuel-efficient cars. Existing incentive programs would be increased by 1,500 euros for electric cars and 750 euros for hybrids.

“It is essential that governments act fast if incentives for new car purchase are to be introduced," said Calum MacRae, an analyst at GlobalData PLC., a U.K.-based research firm. “If there is delay, the risk is that consumers adopt a wait-and-see position, further weakening an already depleted car market."

German auto shares rallied on Tuesday, in part on better-than-expected May sales.

Scholz, a Social Democrat who is also vice chancellor, has proposed a rescue fund of 57 billion euros to compensate municipalities for declining corporate tax revenue and to help them pay off debt. The facility would be financed by German states and the federal government, which would each pledge about 28.5 billion euros.

Altmaier is also proposing measures to allow companies to write off investments from their tax bills. While Scholz agrees in principle, he doesn’t want companies to deduct losses accumulated during the current crisis against past years’ profits, fearing a massive revenue shortfall if they are allowed to claim back previous tax payments.

Scholz wants to increase a family subsidy from the current amount of about 204 euros per child to 300 euros, boosting consumer spending power by as much as 6 billion euros. Merkel’s bloc isn’t opposed, but wants to link the subsidy to income tax, so low-income earners are the main beneficiaries.