'Jab khud bachoge tabhi Preeti ko bacha paoge' is the famous dialogue from the Bollywood film that the Gurugram Police alluded to spread awareness about wearing helmet while riding.
By : ANI
| Updated on: 07 Feb 2020, 03:32 PM 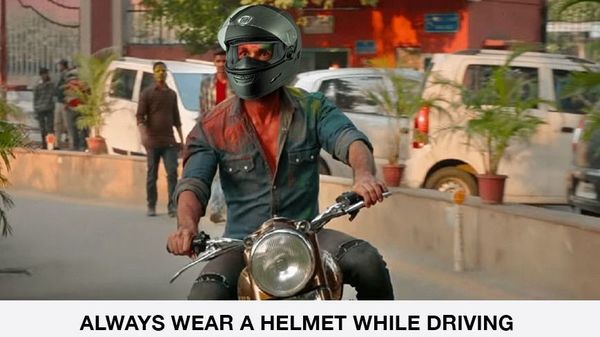 Bollywood and cricket are considered to be two main factors which can influence the citizens of the country and taking a cue from that, Gurugram Police tried to spread awareness about road safety, using a still from a popular Hindi movie.

The social media handle of the police force used a still from Shahid Kapoor and Kiara Advani starrer 'Kabir Singh' to educate people about the importance of wearing helmets while driving a two-wheeler.

In the movie, Shahid Kapoor's character named Kabir is seen driving a motorbike in rage to avenge misbehaviour meted out to his love interest Preeti.

However, Shahid's character is not wearing a helmet in scene, however, Gurugram Police edited a helmet onto Shahid's head and wrote on the picture, "Always wear a helmet while driving."

Gurugram Police captioned the post as - "Jab khud bachoge tabhi Preeti ko bacha paoge," (When you yourself are safe, only then you can save Preeti).

Last week, Mumbai Police also released a video titled 'the Punishing Signal' in which an official can be heard saying "We, the Mumbai Police, wanted to do something like this".

In the campaign, they installed decibel meters on top of signal poles in some parts of the city to check noise pollution. As soon as the decibel at the signal crossed 85db mark, the red signal restarted at the original timer -- 90 seconds.

This is not the first time that the Mumbai Police had come up with unique campaigns to deal with day to day struggles of the common man.

Recently they came up with a social media campaign #DontAppAndDrive to ask the people not to use their mobile phones while driving.

They changed the name of some famous Apps. For instance, 'WhatsApp' was changed to 'WreckApp' while 'Instagram' was referred to as 'Risktagram'.