Home Auto News For The Rebel Without A Pause

For the rebel without a pause

Bruiser Class: Harley Davidson has started assembling its most familiar model, the Fat Boy in India, bringing down the price a tad. Should you be interested? Hari Warrier finds out. Automotive Scrabble | Auto note
By : Hindustan Times
| Updated on: 26 Apr 2013, 11:09 AM

Harley Davidson has started assembling its most familiar model

It has been over three years since Harley Davidson, the all-American motorcycling icon, tooted its horn on Indian shores. In these three years, the company has sold more than 2,000 motorcycles in the country as well-heeled Indians, riding on economic wellbeing, gave expression to childhood dreams. And the company has been encouraged to bring more and more of its product line-up to its local assembly plant, which brings down the excise duty and the ex-showroom cost.


The latest to benefit from this process is the Fat Boy, which is probably the undisputed icon in Harley's current lineup. The 1,690-cc monster that weighs in at over 300kg is not something that you would want to meet in a dark alley. Or would you? Let us demystify this symbol of US street biking.

The bike we have got is a striking yellow, with generous dollops of chrome. The wheels, for instance, are all-chrome plates with perforations. The exhausts, the body details, the instrument cluster, all are picked out in chrome. The sun is bright, and sitting astride the bike, we can't look at the bike! 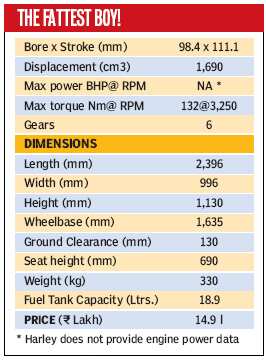 For the rebel without a pause

Throw the switch, and press the self starter, and the bike lets out a roar. It is an awesome thing, the roar of the Harley, though many prefer the more sedate exhaust of the Japanese bikes or the more staccato Ducati note. The regular pipes fitted on this bike keep the note street-legal, though there are after-market custom pipes that open up the engine note to the world (and add some power to the gigantic engine). Auto note

The bike has 6 gears (which is proudly proclaimed on the body work) but in our riding conditions, the sixth rarely comes into play. Only on long stretches where one is sure of uninterrupted riding does one get to engage it --- and then a green light comes on to proclaim '6' on the instrument panel.

The speedo is analog, mounted old-style in the middle of the fuel tank. The fuel gauge is on the left, and the petrol cap on the right. There is no rev-meter, by the way.

Despite the big engine, the weight and the big tyres ensure that the bike doesn't jump around. The take off is more or less sedate, and one is assured that this bike, a cruiser at heart, can handle low speed conditions adequately. The road curves sharply, and as we bank, we come up short. A-ha! The generous foot-rest (not a peg, this. A full-fledged footboard) has made contact with the road. Essentially, this lady does not take kindly to being thrown around corners. We need to get intimate with her ways.

Within five minutes we get into a shocker of a situation as a tractor trolley cuts on to the road blindly. Braking and shifting to the other side of the road, one realises that the brakes have been tuned rather spongily for Delhi conditions. Point to note. Automotive Scrabble

Several short and long rides later, it is time to make an audit.

Speed: The claimed top-speed is 170 kph. We would not like to test that out. We did push to about 140-150, but the wind hammering away at the hands and the chest (this is a naked cruiser, right?) left us rather bruised. At about 120 kph, one felt that it could go on forever, no problems.

Handling: The tyres are fat, and the suspension soaked up most things we threw at it. Not a good feeling on gravel or sand. It needs real roads. Cornering, as we mentioned, is a no-no. In traffic, the low seat-height is a blessing, for otherwise taking it through would be heavy labour. And yes, the all-American butt-rest leaves the rider satisfied, though if a pillion is regular, we may need to get another seat.

Ooomph-factor: One man stopped us to take a picture on his cellphone. With all that chrome, it sure is hard to miss. That, in fact, would be the main reason to buy this bike.

Last but not least, kitna deti hai: The company claims a combined city/highway fuel consumption of about 18 km per litre. Considering that the engine is the size of a mid-sized sedan, that would be about par for the course. If we observe speed-limits, no reason not to get that and even better. We came away reasonably satisfied.