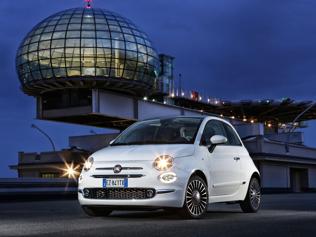 In 2016, the Fiat 500 will celebrate its 80th anniversary. Still as popular as ever, the Italian city car has once again undergone a slight facelift, first unveiled to the public on July 4, and will officially go on sale to the public July 10.

Fiat has unveiled its restyled line of 500s, with LED headlights, a revamped dashboard and an entirely new color palette. The new Fiat 500 will start at 12,490 euros for the 69hp gas powered Pop and go up to 18,490 euros for the 85hp diesel Club with its Dualogic transmission. This model is the last heiress of the 80-year-old saga.

The original Fiat 500, which first appeared in 1936, was nicknamed Topolino, the Italian name for Mickey Mouse. It was born out of Mussolini's desire to give the people a car that was at once innovative and economical. After several prototypes, the Fiat 500 Topolino A was finally presented at the Turin Auto Show on June 15, 1936 and commercialized for less than 9,000 lira. This was the same type of thinking that gave Germany the Volkswagen Beetle.

1957 saw the introduction of the Fiat Nuova 500, considered a 'bubble car' like the Velam Isetta before it. This model came equipped with a two cylinder straight twin engine capable of developing 13hp and racing to a top speed of 85km/h. The different versions of the car, including a sportier one and one with a convertible top, continued to be built until 1975, by which time more than 4 million had been sold around the world, making it the most popular generation of Fiat 500 ever.

In the 1990's, Fiat began selling the Cinquecento, whose name is an homage to the 500 but of whom it is not a direct descendant.

This new Fiat 500 has already seduced more than 1.5 million drivers. Even James Bond will get behind the wheel in 'Spectre,' his latest cinematic adventure, in theaters on November 11.