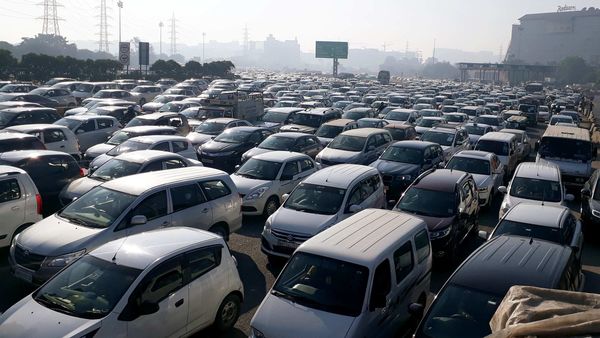 Heavy traffic jam at Gurugram-Delhi border as police personnel barricades the route amid the farmers protest, in Gurugram on Friday.

Massive traffic jams are feared for those travelling between Delhi, Gurugram, Faridabad and Ghaziabad today. The farmers protesting at Delhi’s borders are likely will put up roadblocks by blocking three highways connecting Delhi with these three satellite towns.

Last week, similar protests saw massive traffic jams on roads leading to Delhi. The police has assured to make necessary arrangements to minimise any inconvenience to the commuters. It has set up teams to assess the situation and issue traffic advisory accordingly to alert commuters, if required.

People coming to the national capital from Haryana and Uttar Pradesh faced traffic snarls at several border crossings as the Delhi Police on Thursday intensified vehicle checking in view of the 'Delhi Chalo' march by Punjab farmers against the Centre's farm laws.

Several commuters coming to the national capital from Haryana and Uttar Pradesh complained of traffic jams due to checking last week. Vehicles were also checked at the DND and National Highway-24 crossings with Uttar Pradesh.