Around 70% of gas stations in the state of North Carolina were without fuel, along with about half the stations in Virginia, South Carolina and Georgia.
By :
| Updated on: 14 May 2021, 03:13 PM 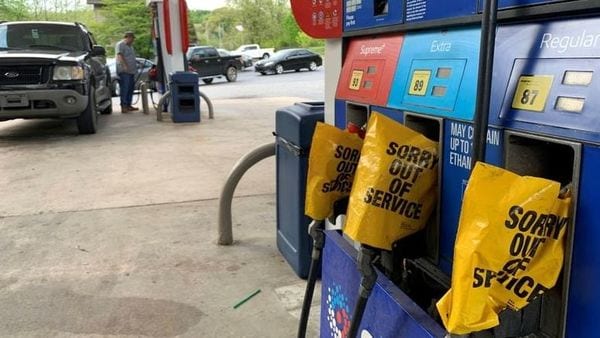 Out of service fuel nozzles are covered in plastic on a gas pump at a gas station in Waynesville, North Carolina.

Drivers in the U.S. Southeast struggled to find gasoline on Thursday, with most pumps in the region dry after days of panic buying, triggered by a major pipeline shutdown.

The Colonial Pipeline, which shut on Friday after a ransomware cyberattack, announced it had begun the restart process but would take days to resume normal operations. That could leave retail stations scrambling for supply for the rest of this week.

Around 70% of gas stations in the state of North Carolina were without fuel, along with about half the stations in Virginia, South Carolina and Georgia, according to tracking firm GasBuddy.

Nicole Guy, a leasing agent in Atlanta, spent much of Thursday morning driving from one shuttered gas station to another in a desperate attempt to refill her tank, before pulling over to gather her thoughts.

"My sister paid $3.50 at the pump last night for her car," she said. "I thought if I went looking today I'd find a better deal. I never paid that much at the pump."

She said she was about to call friends for help finding fuel: "Maybe one of them knows of a spot," Guy said. "Otherwise I'll keep looking."

The average national gasoline price rose above $3.00 a gallon, the highest since October 2014, the American Automobile Association said, and prices in some areas jumped as much as 11 cents in a day.

The Colonial system carries 100 million gallons per day of gasoline, diesel and jet fuel to the East Coast, nearly half the region’s supply. Motorists' tempers have frayed in recent days as panic buying led stations to run out even where normal wholesale deliveries were still being made.

State and federal authorities pleaded with motorists not to hoard, saying stockpiling would only make matters worse.

Levi Edison, 33, a contractor from the city Social Circle, Georgia, about 50 miles east of Atlanta, said he has weathered the fuel crisis with ease in his Dodge Ram 2500.

"It holds 34 gallons - diesel," he said while filing up at a Shell Station in East Atlanta on Thursday morning. "I ain't had no problem, but I feel for most everyone who's had."

"I think if they all calmed down a little and didn't load up when they don't need it, it would be better for everybody. But that's human nature I guess. Just can't wait."

Katlyn Norton, 29, a stay-at-home mother of two from Mobile, Alabama, was in Atlanta Thursday visiting relatives and to take her children to the Atlanta Aquarium.

She filled up her GMC SUV at a Texaco in Midtown Atlanta charging about $3.43 a gallon for regular unleaded.

"We were supposed to head home today, but I'm not sure we'd get enough gas to make it," Norton said of the roughly five-hour trip to head more than 300 miles southwest.

"We thought about trying our luck, but with the kids, I think we'd better stay put. Better to be safe."