Many who opted to take the Delhi Metro after services resumed felt it was the safest bet among public transport options in current times of Covid-19.
By : HT Auto Desk
| Updated on: 07 Sep 2020, 02:11 PM 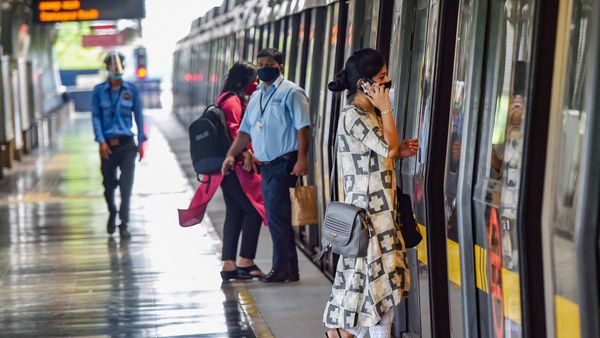 Commuters board a metro train as Delhi Metro resumes operations in a graded manner.

In a sign that life may be returning to some semblance of normalcy even if Covid-19 pandemic remains a clear and present threat, Delhi-ites on Monday returned to get on board metro trains after a break of 169 days. For most though, it almost felt like traveling in the Delhi Metro for the first time ever because of the safety precautions put in place to ensure health and hygiene.

Although the footfall at metro stations in the morning hours was significantly less than the crowds in pre-Covid times, that the trains rolled in and out did bring about cheer - among passengers as well as DMRC officials. It is estimated that the Delhi Metro Rail Corporation (DMRC) has suffered loses worth crores due to services being halted.

And while officials may not breathe a sign of relief, commuters had the biggest grin even if there was still a very visible sense of concern as well. Many who could walked to the nearest metro station while agency reports suggested others took cabs, buses and autos to reach the nearest station. Many of these commuters said that they felt safer at the stations and inside the trains than in the buses and autos they were taking so far. "Of course, I was quite sceptical but then if not today, we will have to eventually take metro rides. How long can we avoid it? I hardly saw less than 10 passengers in my compartment but it was smooth," 45-year-old Sumitra Devi, a government employee, told news agency PTI.

Most stations were opened for operations, but not all. Also, tokens won't be given for now and commuters will have to make use of smart cards which can only be topped up using electronic machines. "Today and tomorrow, only the Yellow Line (49-km span with 37 stations -- 20 underground and 17 elevated ones) will remain operational for a period of four hours each in the morning (7 am to 11 am) and evening (4 pm to 8 pm)," the DMRC said. "Trains will be available with a headway (frequency) varying from 2'44" to 5'28" (at different stretches) with 57 trains performing around 462 trips. The same will be further extended in a graded manner from September 9-12 along with other lines."

Some of the other measures in place are thermal temperature checks before being allowed entry at stations, contact-less security checks, sanitization kiosks, crossed-out seats for proper distancing inside trains, etc.

For many in the city, metro trains will not just be the convenient option once again but may also work out to be significantly cheaper than some other modes of transport like radio cabs. But most importantly, many also feel it would be the safest bet among public transport options in current times of pandemic.