Cops issue 3,284 challans for traffic violations in Delhi on Holi

Most of the challans issued were against people found on two-wheelers minus helmets.There were no fatal accidents in the city.
By : HT Auto Desk
| Updated on: 30 Mar 2021, 08:35 AM 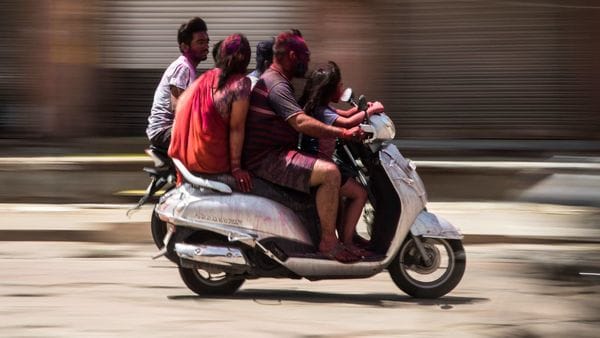 Despite an awareness campaign to drive and ride safe during Holi festivities, there were many instances of commuters reportedly violating traffic rules in the national capital with the Delhi Police informing it had issued 3,284 challans through the day.

Of the total challans issued, 100 were for drunk driving while a majority of 1,255 were for people on two-wheelers not wearing helmets. Another 170 challans were issued for three people riding on a single two-wheeler and 121 for dangerous driving. The remaining challans of around 1600 were for other traffic-related violations. “A total of 3,282 challans were issued for various traffic violations and a majority of these were issued to motorists riding without helmets," an official was quoted as saying.

In good news though, Delhi Police also informed that there were no fatal accidents reported through the day.

The enforcement drive to check on commuters had started early this year with special measures being undertaken to raise awareness as well as crack down against violators. "Special checking teams have been deployed at major intersections and vulnerable points to detect and prosecute traffic violators," Joint Commissioner of Police (Traffic) Meenu Choudhary had previously informed. "Special traffic police checking teams along with PCR and local police teams have been stationed on various roads and strategic locations or intersections across Delhi."