Chipmaker Nvidia has been a key player in the automotive sector for providing the so-called “brain” of the autonomous vehicle.
By : Reuters
| Updated on: 27 Jun 2017, 12:07 PM 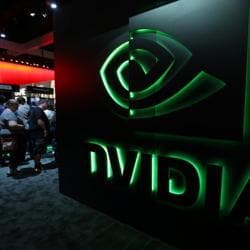 The Nvidia booth is shown at the E3 2017 Electronic Entertainment Expo in Los Angeles.

Chipmaker Nvidia Corp on Monday announced it was partnering with Volvo Cars and Swedish auto supplier Autoliv to develop self-driving car technology for vehicles due to hit the market by 2021.

Nvidia came to prominence in the gaming industry for designing graphics processing chips, but in recent years has been a key player in the automotive sector for providing the so-called "brain" of the autonomous vehicle.

The company, whose many partners already include Tesla Inc, Toyota Motor Corp and tier one supplier Robert Bosch, announced its latest deals at an automotive electronics show in Ludwigsburg, Germany.

In a call with reporters, Nvidia's senior automotive director Danny Shapiro said carmakers and their main suppliers are now moving away from the research and development phase of autonomous vehicles and into concrete production plans.

The system developed jointly by ZF and Hella, and using Nvidia's Drive PX platform, will combine front cameras with radar and software to create technology meeting the Euro NCAP safety certification for so-called "Level 3" driving, in which some, but not all, driving is performed by the car.

Volvo is already using the Drive PX for the self-driving cars in its "Drive Me" autonomous pilot program.

Volvo's production vehicles built on Nvidia's platform, as announced on Monday, are planned for sale by 2021.