Home Auto News Bmw Gets On Track At Pebble Beach

BMW gets on track at Pebble Beach

The BMW Concept M4 GTS unveiled in Monterey ahead of the official start of this year\'s Concours d\'Elegance is a track-focused yet road-legal take on the already potent M4 coupe. And while the company might be calling it a concept, make no mistake: this car will be going into production.
By : AFP
| Updated on: 14 Aug 2015, 04:36 PM 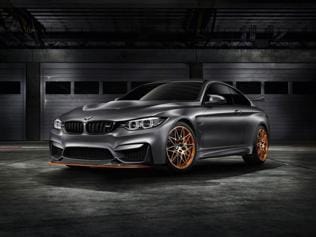 The BMW Concept M4 GTS unveiled in Monterey ahead of the official start of this year's Concours d'Elegance is a track-focused yet road-legal take on the already potent M4 coupe. And while the company might be calling it a concept, make no mistake: this car will be going into production.

And, just as importantly for BMW drivers in general, rather than simply the lap-record setting obsessed, a number of this car's technological tricks will be filtering down to the company's wider range.

Quite literally the coolest of these tricks is a water injection system. Those who remember high school chemistry will know that water and oil don't mix. However they do in this engine. Spraying water vapor into the engine ahead of the fuel cools everything down. Colder air is denser, meaning that the subsequent combustion of the fuel is more potent and powerful and that means that turbo boost pressure can also be dialed up even more.

In layman's terms it means that the engine has extra power or extra fuel efficiency -- depending on how it's being used, of course -- but without having to increase or reduce that engine's size or capacity. It's an ingenious idea.

As is swapping the traditional rear headlamps for OLED units, which are brighter and quicker to react than LEDs, and one light unit can be programmed to produce the several different colors needed to tell those behind whether you're stopping, turning left or backing up.

Away from the hi-tech touches, the car boasts manually adjustable carbon fiber front splitter and rear wing so that it can be set up 'just right' for different track events (or driving on the road) and sits on special lightweight alloy wheels. In a further bid to improve handling, the hood is plastic-reinforced carbon fiber; as well as cutting weight and increasing rigidity, the use of the composite lowers the car's center of gravity, crucial for driving close to the limits.

One thing that the company hasn't revealed is the car's vital performance statistics. The 'standard' flagship BMW M4 Coupe can go from 0-100kph in 4.3 seconds and on to an electronically limited top speed of 155mph (250kph). So the GTS will have to be something special indeed if it's to better those numbers when it goes into production.