The price reduction due to lowering of effective corporate tax rate to 25.17 per cent from 30 per cent for all domestic companies has helped to deepen discounts and drive-in some extra sales numbers.
By : Mumbai
| Updated on: 06 Oct 2019, 01:06 PM 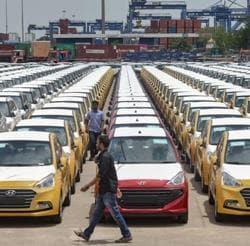 "New introductions have also been instrumental in the slight recovery in passenger car and two-wheeler sales in September 19 over August 19, while the YoY numbers indicate the extremely cold nature of the market. The market is yet to see the recovery mode set in."

Additionally, the immediate price reduction due to lowering of effective corporate tax rate to 25.17 per cent (inclusive of all cess and surcharges) from 30 per cent for all domestic companies has helped to deepen discounts and drive-in some extra sales numbers.

In August, Finance Minister Nirmala Sitharaman announced several measures to boost the sector, including lifting a ban on purchase of vehicles by government departments, and allowing additional 15 per cent depreciation on vehicles bought till March 2020 among others. The decisions are likely to sustain the trend for a few more months.

According to Fitch Ratings Associate Director Snehdeep Bohra, the recent interest rate cut and lower base effect will help stabilise the YoY auto sales in October.

"What is really important is to pass on the interest rate cut to the customers. New launches ahead of the festival season, including BS6 compliant versions, are also going to support the sales momentum," said Bohra.

However, some industry insiders contend that mitigated decline in sales on a MoM basis has been caused due to wholesale adjustment, since dealerships were over-stocked for the last couple of months. Effectively meaning that the dealers stopped buying from OEMs to reduce the stock pile-up.

As per the Society of Indian Automobile Manufacturers' (SIAM) August sales figures, the overall sectoral offtake in the domestic market plunged 23.55 per cent to 1,821,490 units, from 2,382,436 units sold during the corresponding month of the previous year. September sales results are awaited.

Moreover, the industry has estimated that around 15,000 contractual manufacturing jobs have been lost and another million are at risk if the slowdown is not reversed.