Despite run-up costs for its electric-car programme, the luxury automaker wants to keep its operating profit margin at 8% a year at least.
By : Reuters, Berlin
| Updated on: 31 Jul 2017, 10:39 AM 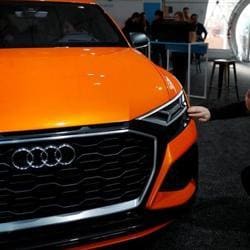 An attendee touches a concept Audi Q8 sports utility vehicle during the annual Google I/O developers conference in San Jose, California, US, May 18, 2017.

Audi aims to cut costs by 10 billion euros ($12 billion) by 2022 to help fund a shift to electric cars as it seeks to move on after the emissions scandal, sources close to the carmaker said.

Audi, Volkswagen's main profit driver, plans to bring five new all-electric models to market in coming years, starting with the e-tron sport-utility vehicle (SUV) to be assembled from 2018 in Brussels.

Despite run-up costs for its electric-car programme, the luxury automaker wants to keep its operating profit margin at 8% a year at least, two sources close to Audi said. Its profit margin in the first half of this year was 8.9%.

The bulk of the 10 billion cost savings would come from cutting research and development costs, the sources said.

Audi also aims to free up funds for investments in zero-emission technology by developing a new production platform with Porsche, allowing both VW premium brands to save money by sharing components and modules.

Audi is grappling with car recalls, prosecutor investigations and persistent criticism from unions and managers over the diesel emissions scandal and its strategy post-dieselgate.

Sources told Reuters on Friday that four of the brand's seven top executives are earmarked for dismissal in the near future. On Sunday, sources said the dismissals were discussed by supervisory board members last Thursday but a formal decision has yet to be taken.