Amazon may soon replace delivery vans with drones in the US

Drones will help Amazon further bring down delivery times in many US cities.Amazon says it is constantly working on making drones operate in a safer environment.
By : HT Auto Desk
| Updated on: 01 Sep 2020, 09:13 AM 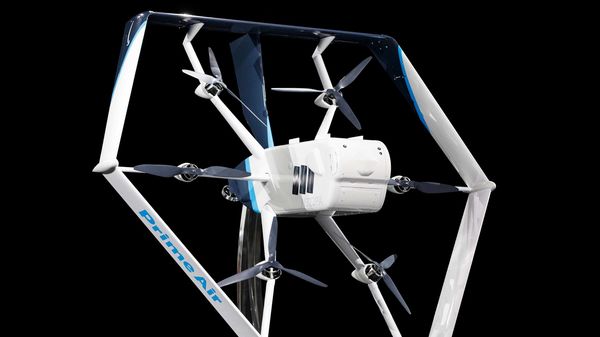 FILE - This undated image provided by Amazon shows one of the company's delivery drones.

Amazon's promise of fast delivery is on the cusp of getting significantly quicker as the e-commerce giant recently received an approval from The Federal Aviation Administration that could pave the way for its fleet of Prime Air drones to take off. While Amazon has not yet informed when its customers can start expecting their packages to arrive through the aerial route, many see the approval from FAA as a significant development towards lightning quick delivery service.

Amazon has been working on and testing its fleet of drones for several years and does recognize obtaining the FAA certificate as a major shot in the arm. It is, however, also expected to continue testing its drones to ensure that they meet not just operational safety but can possibly replace delivery vans in many parts of the US.

The New York Times reported that Amazon issued a statement on the most-recent development in which it informed that FAA certification is a backing of Amazon's work in the field of autonomous aerial delivery systems. David Carbon, VP of Prime Air, reportedly mentioned that Amazon will continue working closely with FAA to bring about drones into the airspace for quick and efficient delivery purposes.

Amazon is known for its one-day delivery service in many of the markets it operates in and reports suggest it is looking at cutting down on this time even further and bringing it down to under 60 minutes. While grocery items are often delivered within hours, breaking within an hour is widely believed to be the golden objective.