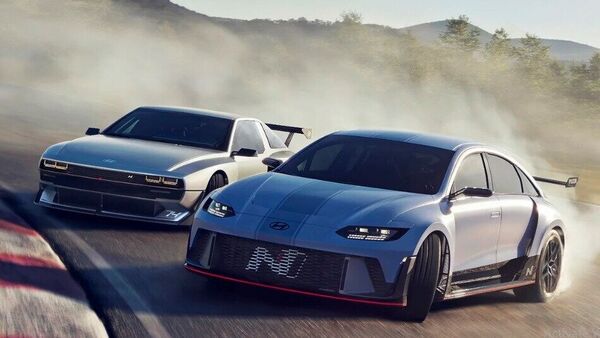 The newly revealed RN22e comes out based on the Hyundai Ioniq 6 EV.

Hyundai has rolled out the new RN22e electric car concept at the Busan Motor Show in Korea. The new vehicle comes out as a race-inspired vision of Hyundai's upcoming electric vehicles. The company mentions this model reflects its vision of future EVs. Previously, the company has also announced that it will bring its Ioniq 5 EV in the Indian market, the same car is also set to become its first EV to receive the ‘N Line’ treatment.

The newly revealed RN22e comes out based on the Hyundai Ioniq 6 EV. The company calls the RN series "rolling lab concepts". The new RN22e follows the RM20e and RM19, which used Hyundai Veloster bodyshells to develop electric drivetrains and mid-engined layouts, respectively. This range doesn't necessarily preview production cars, but rather serves as a development platform for the company's future models.

The company says that the newly revealed RN22e comes out as the closest RN ever built to a potential production vehicle. Taking the Ioniq 6 sedan as the base, the company has aggravated the exteriors of the model using deeper air dams, diffusers, a different spoiler, larger wheels and wider arches, all of which come together to lend the car a much more aggressive stance.

Under the skin of the Hyundai RN22e are kept two electric motors that give the car a four-wheel drive ability. Together, these motors account for close to 585hp. The car also gets the torque split function between the front and the rear axles. The vehicle is equipped with a 77.4 kWh battery pack with 400-V / 800-V fast multi-charging capability. As per the brand, the RN22e has a top speed of over 250 kmph.

Alongside the Hyundai RN22e, the company has also showcased the N Vision 74 concept.