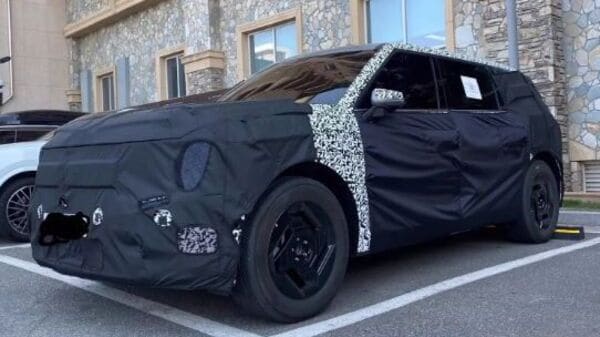 Kia EV9 will be the flagship SUV model from the Koreans with a launch timeline scheduled for 2023. (Photo courtesy video posted on Youtube by GoodmanTV)

Kia is readying its EV9 all-electric SUV for a launch in the first half of 2023 at a starting price of $50,000 and a maximum of 70,000€, the Korean Car Blog reported. The model was recently spotted being tested in Europe for the first time. Its boxy design is reminiscent of the concept vehicle though it has been toned down slightly and the rear suicide doors have been replaced with conventional doors.

The three-row Kia vehicle was first showcased as a concept EV at the LA Auto Show in 2021, and will likely measure around five meters and nearly two meters wide for a solid road presence. Reports suggest that the vehicle can sprint from zero to 100 kmph in around five seconds. It can likely go around 540 kms before needing to be charged again while a range of approximately 100 kms can be added to the vehicle in under 10 minutes.

(Also read | Hyundai and Kia cars in the US are facing a new menace: Details here)

Kia EV6 will come with a long list of features inside with a roomier cabin for more comfort. As per reports, the model will come equipped with large infotainment screen, HD maps, Highway Driving Pilot (HDP), ambient lighting and Auto Lane Change. Also in a first for a Kia model, over-the-air software update (OTA) for controllers and Feature on Demand (FoD) services will allow customers to selectively purchase software functions for the vehicle.

Once launched, the Kia EV9 will compete with its Korean sibling Hyundai Ioniq 7 that is also being prepped for a 2023 launch in select markets. Both the vehicles will appeal to customers looking for an SUV body style with battery power and ample features. The Hyundai Ioniq 7, too, will have a per charge range hovering around 500 kilometres as well as will get a three-row configuration.