Hyundai to launch Ioniq 5 N in 2023, unveils new EV concept based on Ioniq 6 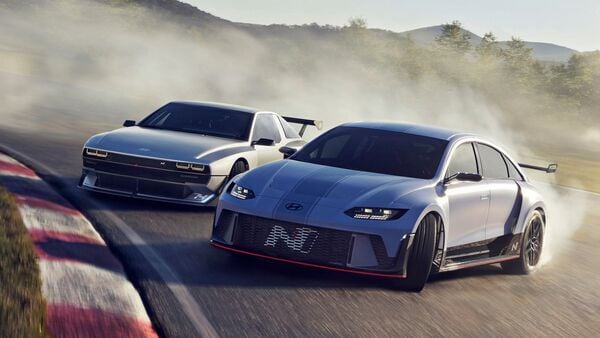 Hyundai Motor has announced that it will launch the N Line performance version of its electric crossover Ioniq 5 next year. The Korean carmaker made the announcement on N Day, which revealed the company's future plans with its performance car lineup brand early on Friday. The Ioniq 5, which will be Hyundai's first fully electric car to get the N branding, will hit markets in 2023. The standard version of the Ioniq 5 EV will hit the Indian markets closer to the festive season this year.

Besides announcing the launch timeline of the Ioniq 5 N version, Hyundai also showcased two new EV concepts with N Line badging. The two EV concepts are called RN22e and N Vision 74. The RN22e is based on the same platform used by Hyundai Ioniq 6.

Thomas Schemera, Executive Vice President and Head of Customer Experience Division at Hyundai, said, "RN22e and N Vision 74 play an important role in the strategic development of our entire product lineup, especially our electrified, high-performance vehicles. Rolling labs represent the continuous development of our most advanced technologies. This unique approach makes us ready for the challenges of the future by empowering us to push ourselves to the limit."

The RN22e EV concept is based on the Ioniq 6 electric sedan which was officially unveiled on Thursday. The RN22e is influenced by the Ioniq 6’s design which offers aerodynamic features with motorsports-inspired details. Hyundai RN22e stands 4,915 mm in length, 2,023 mm in width and 1,479 mm in height. It has a wheelbase of 2,950 mm and is based on the Hyundai's dedicated EV platform E-GMP.

The second EV performance concept N Vision 74 is the first N Line model built on the most advanced hydrogen fuel cell system. The N Vision 74 measures 4,952 mm long, 1,995 mm wide and 1,331 mm tall on a 2,905 mm wheelbase. The EV concept comes with a coupe design and a driver-centric cockpit with digital cluster and analogue buttons. The N Vision 74 is also inspired by the concept car Hyundai N 2025 Vision Gran Turismo, which was unveiled in 2015.