As Maserati begins to conclude its centenary year celebrations no one is better qualified to ensure that the party ends with a huge automotive crescendo than Zagato, the company behind so many iconic Maserati designs of the past.
By : AFP
| Updated on: 25 May 2015, 03:31 PM 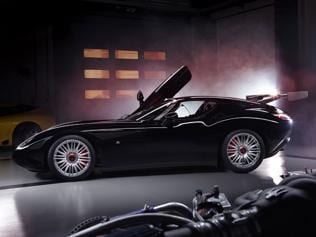 As Maserati begins to conclude its centenary year celebrations no one is better qualified to ensure that the party ends with a huge automotive crescendo than Zagato, the company behind so many iconic Maserati designs of the past.

And the Mostro powered by Maserati is sure to generate a lot of noise when Zagato officially unveils it on Saturday as part of this year's Villa d'Este Concourso d'Eleganza classic car show on the banks of Lake Como in Italy.

The event is a mecca for concourse condition classics, coach-built exotic flights of automotive fancy and for concept cars that push the envelope of what is possible in terms of exterior design. However, unlike many of the star cars on show this year, this Zagato-built Maserati is the real deal.

Inspired by the Maserati 450S Coupé Zagato, commissioned and raced by none other than Sir Sterling Moss at the 1957 Le Mans 24 Hours, this car isn't a concept, it's the first of five production models, each of which has already been sold.

However, it means that several people are going to have an exceptionally happy Christmas, as Zagato has earmarked December 2015 as the delivery date for client cars.
The Mostro is built almost entirely from carbon fiber -- it permeates every body panel, although the MonCell is a mix of carbon fiber and steel tubing -- and power comes from a Ferrari-Maserati-developed 4.2-liter V8 engine.

Like its automotive inspiration, this car is built for the track. It has double wishbone suspension and pushrod actuated shock absorbers to minimize unsprung weight, while its six-speed semi-automatic transmission is rear mounted for better weight distribution.

And while its makers promise that like the original, it will dominate a racing circuit, it will be totally road legal too and it's understood that the huge, fixed rear wing is removable for a better cruising aesthetic.

The house of Zagato has played a key aesthetic role in the story of many of motoring's most iconic marques, from Alfa Romeo and Aston Martin to Ferrari, Lancia, Lamborghini and of course Maserati. So much so, it has become the go-to atelier for a celebratory concept. Zagato has produced centenary models for Alfa Romeo, BMW and Aston Martin that starred at the Villa d'Este Concours d'Eleganza in recent years.