Home Auto News You Could Win A Pininfarina Miniature Model From Anand Mahindra. Here's How

You could win a Pininfarina miniature model from Anand Mahindra. Here's how

The 2018 Pininfarina H2 Speed is the limited-run first electric hydrogen racing car.It was awarded the Concept Car of the Year Award and named the Best Concept at the 2016 Geneva Motor Show.
By : HT Auto Desk
| Written By : Deepika Agrawal
| Updated on: 01 Jun 2021, 04:06 PM 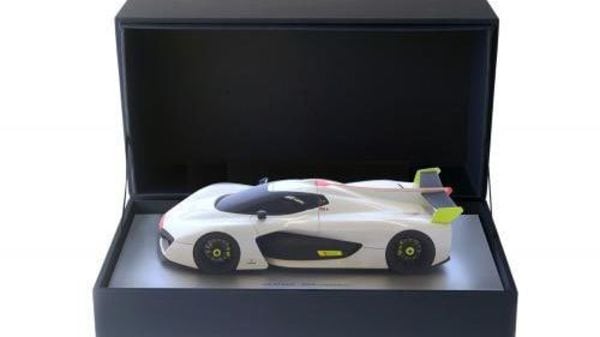 If you have a penchant for car miniatures and for motorsport, this is your chance to lay hands on a Pininfarina H2 Speed miniature - the first electric hydrogen racing car. What is even more exciting is that the scale model is being offered as a gift by Mahindra and Mahindra's Chairman Anand Mahindra. But mind you, this gift must be won.

Mahindra is known to be quite active on social media platform Twitter and often engages with his followers by conducting small competitions. Case in point is the latest title competition announced by the industrialist where he has invited suggestions for a new title for the city of Bengaluru. "I'm not thrilled by Bengaluru being called 'Silicon Valley of India'. What do you think would be a good, original title for India’s High-Tech capital?" he wrote.

So here’s a variation on the caption competitions. This is the gift for the person who sends in what I feel is the best suggested new title for Bengaluru in place of ‘Silicon Valley of India.’ A scale replica of Pininfarina’s (@MahindraRise company) H2 Speed. (2/3). pic.twitter.com/A6KKdIOsXa

All the entries received within 48 hours from the time of the tweet - 1:47 p.m. on June 1 - will be considered for this 'title competition'. The lucky winner will be gifted the Pininfarina H2 Speed scale model. Notably, Pininfarina is a Mahindra Group company. The Pininfarina H2 Speed was awarded the Concept Car of the Year Award and named the Best Concept at the 2016 Geneva Motor Show. In 2018, the company had said that only 12 track-only examples of the hydrogen-powered racecar would be produced and that all the units will be customised to the requests of each individual client, allowing them to experience the excitement of driving a real racing car on the track.

The racing car produces 634 bhp and has a top speed of 186 mph. It reaches 62 mph in 3.4 seconds. The vehicle's 8.6 kg-capacity hydrogen tank can be filled to 700 bar in three minutes. The manufacturer also claims that the car produces a distinct tone from an regular electric car.