The crashes and pile-up of vehicles on Pennsylvania highway also lead to multiple fires with at least three tractor trailers found to be on fire when emergency personnel arrived on the scene.
By : HT Auto Desk
| Updated on: 29 Mar 2022, 07:27 AM 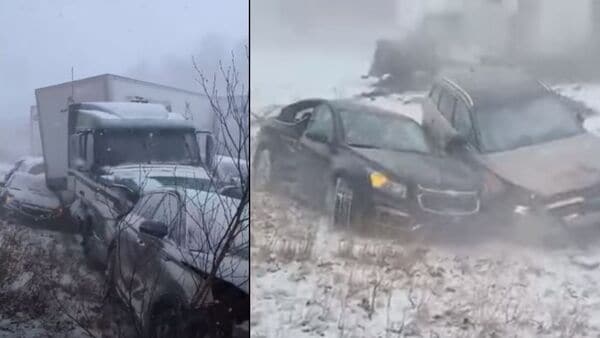 The initial crash in Pennsylvania took place due to a snow squall that clouded visibility and involved multiple tractor trailers,

A collision involving a tractor-trailer and a large truck lead to a pile-up of as many as 40 vehicles on Interstate 81 in Pennsylvania, US, and killed at least three people while sending more than a dozen others to area hospitals on Monday. A portion of the highway was closed off post the incident.

The crashes and pile-up also lead to multiple fires with at least three tractor trailers carrying unknown cargo found to be on fire when emergency personnel arrived on the scene. Smaller fires broke out out in other vehicles as well but all had been brought under control, Blickley said.

A footage uploaded on Twitter shows the massive pile-up of vehicles with black smoke coming out of some. The video shows many cargo vehicles with massive trailers. Another video showed an out of control tractor-trailer smashing into a large dump truck, turning it nearly 180 degrees. Another large truck spit out black smoke while an SUV struck a passenger car sending it spinning, narrowly missing its driver. People off camera can be heard yelling as the collision unfolds in less than a minute.

The Schuylkill County’s transportation authority helped transport motorists who were uninjured to a warming center set up by the local Red Cross, where family members could connect with them. The northbound section of the interstate was said to be closed until the crash investigation and clean up continued. Officials also cautioned that more snow squall warnings are expected and asked people to be careful and pullover if needed.