The potential battery-powered revamp of the van, known as the Bulli in Germany, was first announced at the Detroit auto show in January.
By : Reuters, Berlin
| Updated on: 20 Aug 2017, 09:48 PM 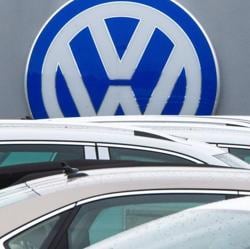 A logo of German car maker Volkswagen at a dealership in California.

Volkswagen has decided to go ahead with production of an electric version of its classic Microbus camper van as it seeks to boost its electric vehicle credentials.

The potential battery-powered revamp of the van, known as the Bulli in Germany, was first announced at the Detroit auto show in January.

"After the presentations at the global motor shows in Detroit and Geneva, we received a large number of letters and emails from customers who said, 'please build this car'," Volkswagen brand chief Herbert Diess said in a statement.

The electric van, known as the ID Buzz, will go on sale in 2022 and VW said it will target customers in North America, Europe and China. The company will also build a cargo version of the van, it added.

Tesla, headed by Elon Musk, has shaken up the auto industry with its ambition to build a mass market for electric cars, posing a competitive threat to established manufacturers that remain reliant on producing cars with combustion engines.