Two single-cylinder babies from the Pune major mark India’s debut in the adventure segment. HT goes for the ride
By : Hindustan Times
| Updated on: 15 May 2015, 17:03 PM 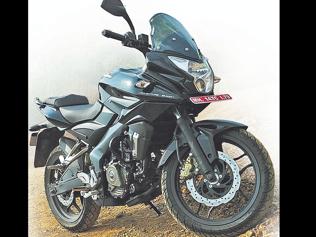 BAJAJ HAS DONE WELL TO BE FIRST OFF THE MARK IN A NEW NICHE, BUT MAY HAVE LET GO OF AN OPPORTUNITY TO CONSOLIDATE

Biking legend Ted Simon, who has traversed the globe twice on a bike, told this writer once, "It is not about the size of the bike. It is about getting on a bike, any bike, and riding." Owning a stableful of steeds is no use if you don't put rubber to road, to mix metaphors.

In the last few years, motorcycling in India has gone beyond the commute to office and the occasional ride to the pub. Leisure riding has become an important part of socialising, and the rider has become more adventurous and exacting in terms of what he wants. Not everyone is shelling out big bucks for a Harley Davidson or a Ducati, but most are no longer content to putter along on a 100cc either. Enter, Bajaj Pulsar.

The Bajaj Pulsar brand, arguably the first to bring the sportsbike concept at the lower end of the spectrum, recently entered the adventure segment, hitherto hogged by the Bullet but which is really the forte of multi-cylinder monsters such as the Triumph Tiger and the Suzuki VStrom, or at the very top, the peerless BMWs.

So what can a Pulsar do by way of climbing hills? We rode the Pulsar AS150 (AS referring to Adventure Sport) and its elder sibling, AS200, up and down the hills of Maharashtra to answer precisely this question.

First up, there is nothing much to distinguish the two by way of looks - which is rather puzzling. If you have spent ₹ 12,000 more, you'd obviously like everybody to know that fact. Only the drum brake at the rear, and the smaller wheels give away a 150 from a 200.

The short fairing, high ground clearance, upright stance, tall seat, all point toa sort of scaled-down form of a trueblue adventure bike, something that is serious about getting tough jobs done. The projector headlight is carried over from the RS200, and is a welcome feature. Alas! the other big features of the RS have been shorn off: fuel injection and ABS (anti-lock braking system). Of course, this brings the price-point down by several notches. The standard RS200 costs ₹ 1.18 lakh ex-showroom Delhi, but the new AS is just ₹ 91,550 - the same as the NS200, the first of the new 200-cc Pulsar trio. And the 150 is just shy of ₹ 80,000. In a price-sensitive market such as India, this should translate into additional sales of a few thousand bikes.

The catch is that all this hobbles the bike on performance. An "adventure" bike should deliver on horsepower, but the AS siblings fall short, both in terms of top-end power and lowend torque. Maintaining revs is a struggle, and even with a single rider, ends up panting on steep inclines. With a pillion, and maybe a saddlebag in tow, it would be an uphill struggle, if you'll pardon the pun.

Which is a pity, because the bike is excellent to handle, and the brakes are responsive (even the drum on 150). Bajaj has done well to be first off the mark in a new niche, but it seems to have let go of an opportunity to consolidate from the RS200.

Bajaj could well have used the chance to set the bar really high in the nascent adventure segment.