Facing stiff competition from a rash of compact crossovers from Ford, Renault and Hyundai that has resulted in a weakening of its leadership in the SUV segment
By : Hindustan Times
| Updated on: 31 Jul 2015, 10:43 AM 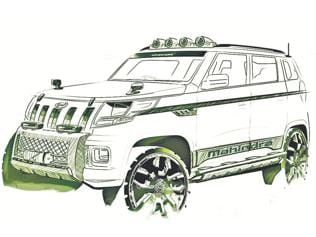 The TUV300 will be made at M&M’s Chakan plant

Facing stiff competition from a rash of compact crossovers from Ford, Renault and Hyundai that has resulted in a weakening of its leadership in the SUV segment, Mahindra & Mahindra is going back to its roots and adopting a flanking strategy once used by Maruti Suzuki for small cars a decade ago.

In the span of the next few months, the company will launch at least three new SUVs all under ₹ 10 lakh, but with varying size and capability as it seeks to retain its stranglehold in its own turf.

The company on Thursday revealed sketches of the upcoming sub-four meter compact SUV, named TUV300. Earlier codenamed U301, it will go on sale in September.

"The reason we decided to launch this product is that as an SUV leader we need to make sure a customer who wants a true blue SUV is not left high and dry. Therefore, we are offering an option to those who want a real SUV in terms of styling, interiors, performance, all of those things," said Pawan Goenka, executive director of M&M.

The TUV300 is built on a new platform and will be manufactured at M&M's Chakan plant near Pune. The research and development of the product was done at the Mahindra Research Valley in Chennai. While the designing was in-house, M&M had roped in Italian design house Pininfarina as a consultant.

M&M also plans to sell the TUV300 in international markets and is currently working on a left-hand drive version and variants that will meet emission standards in other countries, Goenka said. Inter national variants could be ready in a year.

It is working on another SUV codenamed S101, which will be launched later this year and will compete more directly with likes of Ecosport, Duster and Creta.