Toyota, Suzuki finalise pact to launch EVs in India by 2020

Suzuki will produce EVs for the Indian market and will supply some of them to Toyota, which will provide technical support.
By : Press Trust of India, New Delhi
| Updated on: 17 Nov 2017, 06:00 PM 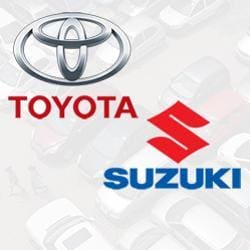 A combination of Toyota, Suzuki logos.

The two companies said in a joint statement that they have concluded a memorandum of understanding (MOU) to take forward a co-operative structure under which Suzuki will produce EVs for the Indian market and will supply some of them to Toyota, which will provide technical support.

Besides, the statement said, they intend to conduct a comprehensive study of activities for widespread acceptance and popular use of EVs in India.

"Such activities encompass the establishment of charging stations, human resources development that includes training for after-service technicians employed throughout sales networks, and systems for the appropriate treatment of end-of-life batteries," it said.

In February this year, the two companies had announced exploration of a business partnership after which they began discussing, among other topics, the dissemination of vehicle electrification technologies in India.

Suzuki has already announced that it intends to construct a lithium-ion battery plant along with its partners in Gujarat, where it currently operates a manufacturing plant supplying automobiles exclusively to its Indian arm Maruti Suzuki.

As per the agreement, in addition to lithium-ion batteries, electric motors and other major components would be locally procured for production of EVs in India.

The announcement by the two companies comes at a time when the Indian government is pushing for electric vehicles, setting a target of an all electric fleet by 2030.