The battery that charges your electric car has a fire problem

Automakers are rolling out a fast-growing fleet of electric vehicles to clean up transportation, the source of nearly a quarter of the world’s greenhouse-gas emissions. The path away from fossil-fuel power means more giant batteries—and more risk of dangerous fires.
By : Bloomberg
| Updated on: 29 Jan 2020, 11:46 AM 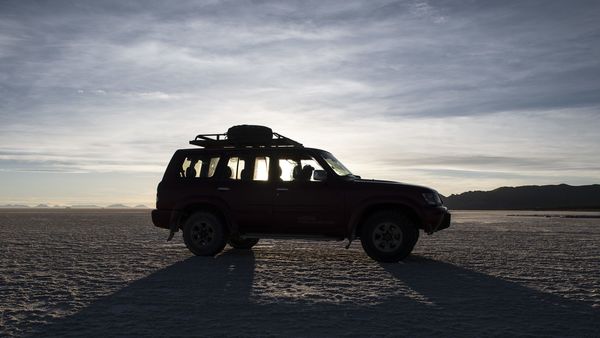 A sports utility vehicle (SUV) sits on the Salar de Uyuni (Uyuni Salt Flats) in Potosi, Bolivia, on Tuesday, Dec. 10, 2019. South America controls about 70% of the world's reserves of lithium, the metal used in rechargeable batteries for mobile phones and electric vehicles, with future refining and battery-assembling facilities seen as away to help kick start economies. Photographer: Carlos Becerra/Bloomberg

The explosion ruptured the dusk settling over the desert in Surprise, Arizona. For hours, smoke had poured from a metal shed packed with lithium-ion batteries at a small electric substation. The batteries were tied to the electric grid, and somehow they had caught fire.

Firefighters searching for the source of the smoke opened the shed door, and minutes later gases seeping from damaged batteries caused the explosion. Body-camera footage from the scene showed a firefighter dazed and breathing heavily as blood ran down his forehead. Two of the four people injured had to be airlifted to a hospital.

It’s likely that few people living near the substation, on the edge of suburban Phoenix, realized the facility held the kind of supersized batteries seen as key to unleashing renewable energy upon power grids and helping solve the climate change crisis.

Plunging prices and intensifying efforts to reduce greenhouse-gas emissions have touched off a battery boom. Energy companies are plugging more battery packs into the grid as a way to store renewable power and replace fossil-fuel plants. Megaprojects are becoming the norm. Last year, regulators approved a battery installation in New York City that will be big enough to power 250,000 homes for eight hours. Developers near Las Vegas plan a similarly huge system to store energy from a 690-megawatt solar plant.

But the April explosion in Arizona illustrated a lingering problem that has long dogged lithium-ion batteries: fires that can be difficult to douse. In South Korea, a global leader in battery manufacturing and adoption, there have been at least 23 fires over a roughly two-year period, according to BloombergNEF, spooking customers and prompting a government investigation.

In little more than a decade, the rechargeable batteries invented in the 1970s have become a cornerstone technology of 21st century life. They are seldom far from any of us, powering toothbrushes and smartphones, toys and ear buds, laptops and Teslas. Global production is expected to triple within the next three years, according to BloombergNEF.

If lithium-ion batteries started as consumer convenience, now they have emerged as an indispensable tool to combat global warming. Electric utilities need a way to soak up solar energy during the day for use after dark and bottle the output of wind farms for when breezes fade. Automakers are rolling out a fast-growing fleet of electric vehicles—not just cars, but pickups, buses and big rigs—to clean up transportation, the source of nearly a quarter of the world’s greenhouse-gas emissions. The battery’s moment has arrived.

But rapidly swelling numbers will likely bring more battery fires. The incidents remain rare compared to the volume of batteries, but experts expect a surge as the technology becomes ever more inescapable.

“If the percentage of failures holds, that could mean a lot of problems," said Mike Simpson, senior technical leader at the Electric Power Research Institute. “Even a one-in-10 million likelihood of failure on the assembly line could still lead to many failures on the road."

Fear of fires isn’t killing global battery demand, which BloombergNEF predicts will grow more than seven-fold by the end of the decade. But the incidents have, at times, shaken public confidence. South Korea, the world’s third-largest battery maker, went on an installation binge of utility-scale batteries until a string of nearly two dozen fires prompted a backlash and government probe. In the end, the investigation blamed many of the fires on sloppy installation and operational errors.

“This is early growing pains for a new technology and a new industry," said Daniel Kammen, chair of the Energy & Resources Group at the University of California at Berkeley. “We didn’t even have grid-scale batteries a few years ago."

Some fires can be traced to manufacturing defects in the battery cells themselves, or physical damage after installation. Overcharging can also be a problem, Simpson said, as can poor integration with other electrical systems.

Each of those factors can tip a battery cell into a dangerous, uncontrolled chain reaction known as thermal runaway. The flammable electrolyte inside the cell suddenly heats up and causes the same thing to happen in adjacent cells. Once ignited, the batteries can emit toxic fumes.

Firefighters are learning on the fly how to respond. Dousing the flames takes a large amount of water, and cells can re-ignite hours after the initial fire has been extinguished. Following the explosion last year at the Arizona energy storage facility, investigators spent months carefully removing racks of batteries so they could be drained of energy.

Brian O’Connor, an engineer with the National Fire Protection Association, said first responders need far more training on how to handle burning batteries. The association, which develops fire codes, recently issued standards for energy storage installations in buildings, including how far they should be spaced apart and which fire suppression systems to use. “The technologies do not come without risks," O’Connor said.

At a recent conference, the fire association hosted several sessions on the safety of battery installations. One was titled, “Energy Storage in Your Home: Can You Sleep at Night?"

South Korea showed what can happen when battery fires cause alarm. A booming market that had seen more than 4 gigawatt-hours of capacity added in 2018 suddenly froze up. Installations in South Korea last year could have fallen 75 percent or more, according to preliminary BNEF estimates.

Government investigators did not blame the fires on any inherent flaw in the batteries themselves. Instead, they faulted the design and operation of energy storage systems that included the batteries. In some coastal areas, for instance, energy systems lacked adequate protection against humid air. In other cases fuses designed to interrupt the flow of current had failed. Investigators even found simple bad wiring, as if in a house built by careless contractors.

Logan Goldie-Scot, head of clean-power research at BloombergNEF, pins many of those problems on the Korean battery industry’s rapid growth. Spurred by government incentives, energy storage installations grew more than five-fold between 2017 and 2018. “It’s companies with relatively limited experience in installing and integrating these systems doing a lot in a very short space of time," Goldie-Scot said.n

The investigation led to tighter government safety requirements for energy storage systems in Korea, in their design as well as operation, and more frequent inspections. But the new measures haven’t completely stopped the fires, leaving the South Korea market in limbo.

Pinnacle West Capital Corp.’s Arizona Public Service, owner of the battery system that burned in April, remains committed to deploying 850 megawatts of energy storage on its grid, one of the largest commitments by a U.S. utility. But APS has halted installations while it investigates the fire’s cause, said Brad Albert, the company’s vice president of resource management.

“The most important aspect of this is safety for us," he said. “We need to understand whatever we can learn from this."

Another APS battery facility suffered a fire in 2012, and the two incidents prompted a member of the Arizona Corporation Commission to write in an August letter that the batteries “are not prudent and create unacceptable risks." The energy storage industry wants to ensure that sentiment doesn’t spread. Its trade association has been developing standards for safe operations.

“We just want to get out ahead of it," said Kelly Speakes-Backman, chief executive officer of the U.S. Energy Storage Association. “Energy storage is growing quickly, but it is still a relatively small market. We want to make sure standards are in place by the time we hit a large penetration in the market."