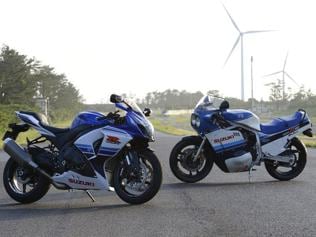 The anniversary edition GSX-R 1000 next to the 1985 original. Photo:AFP

To mark its 30th year in production, a championship-winning sports bike is getting a limited edition paint job.

The anniversary edition of Suzuki's GSX-R, which will go on sale this November, is finished in the classic blue and white livery that adorned racer Kevin Schwantz's GSX-R when he rode to victory in 1985.

Thirty years on the bike has evolved considerably in terms of technology and power -- it now has a 1000cc engine and ABS but it is still devastating rivals at the track and the celebratory model is just that, a reminder of the bike's achievements.

Other than the unique paint finish, the bike is the same as the current road-going model.